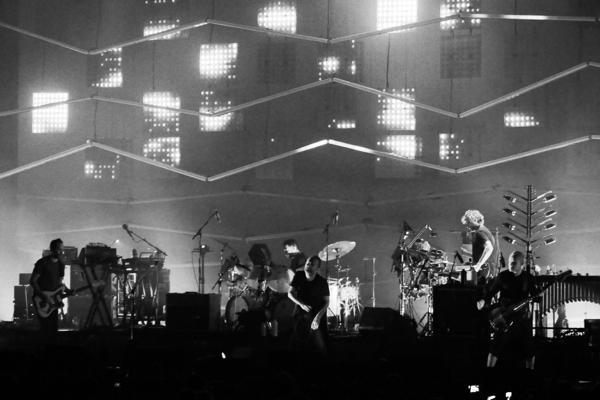 You know you’re a rock star when your offshoot side project of another one of your side projects fills Barclay’s Center. On Friday September 27th, Atoms for Peaces played Barclays Center, the second stop on the North American leg of their tour for their 2013 release Amok.

The brainchild of Radiohead front man Thom Yorke and producer extraordinaire Nigel Godrich, Atoms for Peace is a continuation of Yorke and Godrich’s foray into the world of dance club music that started with the 2006 release, The Eraser.

Amok is definitely best listened to on headphones. It is not traditional dance music and at times its bizarre harmonic swathes evoke Schoenberg rather than Tiesto, but to pump up the energy, Yorke and Godrich recruited the Chili Pepper’s Flea on bass, the excellent Joey Waronker of Beck (and R.E.M if you care about R.E.M.) on drums, and percussionist Mauro Refosco.

On the record, Godrich’s produced beats and loops amply power the tracks, but live these tracks combined live with the heavily stacked rhythm section of Flea, Waronker, and Refosco created something that was on the surface dance music, but with a mesmerizing funked-out polyrhythmic Brazilian Samba school flavor that, in the good old fashioned way, kind of rocked.

Flea and York jumped around the stage with boundless energy while flawlessly staying connected to the rhythm section’s super tight, hypnotic grooves. Yorke’s voice soared like ambrosial audio above the mix, but production wise, the show seemed under rehearsed. Song endings were messy, either too abrupt, or trailing off without conviction, the lighting tech missing cues, dimming stage lights seconds too late, after songs had clearly already ended. It seemed obvious that were kinks in rehearsals that had yet to be ironed out.

In a venue as large as Barclays Center an act really has to bring all they’ve got if the want to supercharge it. Despite the numbers of screaming fans, and the dazzling and impressive LCDs illuminating the stage full of gear, the band couldn’t power the venue. Despite all the on-stage energy, the show felt more like something you’d watch at Radio City than a stadium rock show. Even the actual volume of the sound itself was very low. I am notorious for wearing earplugs, and for this show, I took them out. The most disappointing factor of all was the shortness of their set. I felt it there should have been, at the absolute minimum, five more songs.

Although the show was bit of an overall disappointment, still, for a Yorke devotee like myself, the rarity of witnessing Yorke’s Midas touch live was far more reverberant than the disappointment that Atom’s for Peace music is just far from proper stadium rock.