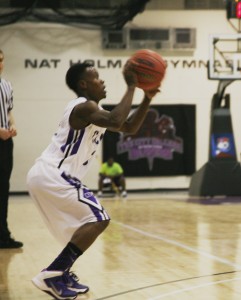 Che McCoy’s 15 points led CCNY to a rally. His three-pointer at the buzzer led them to a win.

Che McCoy’s 15 points led CCNY to a rally.  His three-pointer at the buzzer led them to a win.

Started hot, played cold, stayed quiet for a second, and then ended perfectly. And what a start to the season it was.

With the final possession of the game, Che McCoy nudged the Beavers to a 1-0 start with his buzzer-beating three pointer in CCNY’s 76-73 win over The College of New Jersey Monday night. You can see a video of the game winning shot here: Che McCoy Drains Game Winning Buzzer Beater to Win CCNY Men’s Basketball 2013 Season Opener

McCoy finished the night with 15 points and seven assists.  He shot just 6-for-16 on the night including a crucial 3-for-7 from three point land.

“Our guys just didn’t give up at all,” said head coach Tom Green after the game.  “All in all, a great team win.”

“It’s a good progress for the team,” McCoy added.

The Beavers opened the game as hot as they ended their preseason finale against Cooper Union just three days ago, opening with a 14-4 lead, capitalizing in the paint and playing solid transition defense.

Then they got as cold as winter, missing easy and key shots, along with numerous free throws  as the Lions rallied back in the late stages of the first half to take the 43-39 lead going into the break.  TCNJ took the lead in the final minute of the half off a pair of free throws and a steal on a mishandled inbound by CCNY.

“I told the guys I don’t think I’ve ever been around a team that shot so poorly,” Green mentioned after the game.  CCNY was all of just 9-for-28 from the free throw line and shot under 50% for the night from the court.

“Missed free throws are something we’re going to be working on,” Green said.

In the second half, the Beavers tried to rally and claw their way back, opening the half on a 9-5 run, eventually tying the game at 48 with 14:22 left in the game.

Both the Lions and Beavers would trade the lead in a mini shootout that saw three lead changes within a two minute period, with TCNJ eventually taking a 71-64 lead.

CCNY would come within five on a layup following a TCNJ turnover and McCoy put the Beavers within three off a layup with just over two minutes left.

McCoy’s second three pointer on the night tied the game at 73 for the Beavers in the final 30 seconds and a missed layup by the Lions set up CCNY for what became the game-winning possession.

“I stuck with it,” McCoy said about his shooting performance leading up to his game winner.  “I got more confidence in my shot.”

The Beavers will finish this season opening homestand on Sunday when they take on Yeshiva Unviersity at Nat Holman at 2 p.m.

And the last time McCoy hit a game-winning three: in the 2011-12 season playing at Lincoln Junior College in New England.  So, nothing new for the 5’9” point guard, but a great way to begin his D-III career.