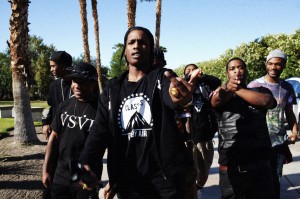 “Trap Lord”, released August 20th of this year, is the first solo studio album from A$AP Ferg, making him the second member of the Harlem collective to release one. The only other member with a solo album is, the better known A$AP Rocky, who released Long. Live. A$AP earlier this year. Rocky’s album debuted at number 1 on the Billboard 200, which ultimately gained him and his crew popularity in the music world. While his mixtape Live. Love. A$AP generally sat well with critics and listeners, his debut album got his foot in the door.

The spot for being New York’s top rap crew is surely not going uncontested. Out of Brooklyn, New York, there is Pro Era, the rap group headed by Joey Badass. Each of the groups have a collective mixtape. A$AP Mob released “Lord$ Never Worry” in August 2012, while Pro Era released Peep: The Aprocalypse in December 2012. The two groups can also attribute tours to their resume, as each of them have had numerous trips around the country and overseas.

That being said, the Mob seems to come out on top by one deciding factor: their personal cypher during the 2013 BET Hip Hop Awards. Rocky and Ferg, along with fellow members Nast and Twelvyy, each spit a freestyle during a popular segment of the award show. A$AP Mob has clearly gained enough recognition to perform at this award show, commemorating the achievements in the hip hop genre over the past year. Pro Era has yet to do so.

The Mob is not done yet. They have only reached the surface, and have a long way to go before they can be labeled the top rap crew of New York. They must be aware of the road ahead of themselves as well. News came out that the group was planning on releasing a sophomore project on October 15th, although that release date has been pushed back.

It is unclear which rap crew is going to come out on top in New York, but with the recent success of A$AP Mob, you can expect nothing but greatness from them. And while the race for New York is still up for grabs, the Mob can still call Harlem their own.