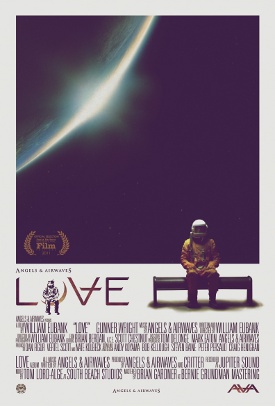 In Love, a film by William Eubanks (2011), lone astronaut Captain Lee Miller is manning the International Space Station when suddenly he loses communication with Earth. At first the disconnection seems to be a technical glitch, but Lee examines and reexamines his gear; he realizes that the problem is more serious. Something has happened and Earth is no longer transmitting at all. When a recorded message finally does reach Lee he is infuriated. He thinks he has been abandoned, but his rage subsides as he realizes the true consequence of his situation.

Alone on the space station for 6 years supplies begin to dwindle, life support systems reach critically low levels, isolation takes its toll. Hypnotically, Eubanks takes separate segments of time and forces them together to form something telling, a transformation that is forced by chance. The mere unlikely probability that human kind even exists is contrasted against the alternative, the much more likely outcome that it doesn’t.

Eubanks’ scale of comparison, this timeline of humanity is limited and goes back only as far as the civil war, a mere drop in the bucket of human history, and a moment of unregistered minusculity if evaluated on a universal scale. Still, even though the comparison could have been vaster, the point is made, and the film leaves the viewer with an aesthetically original and brilliant closing, even if the film’s title Love is as unoriginal it gets.