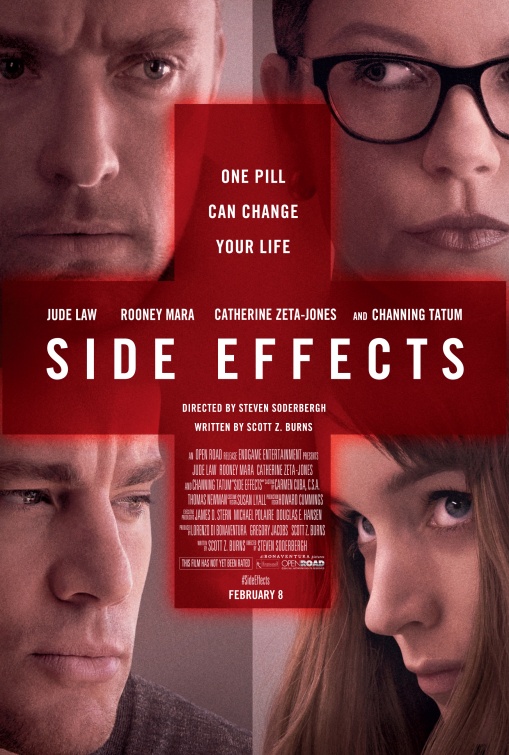 Steven Soderbergh takes the subjects of drugs and depression head-on in Side Effects, a film that examines how the lives of a group of individuals inevitability become tied together by mental illness and chance.

Emily Taylor’s (Rooney Mara) life is on the brink of total collapse. After waiting four years for her husband to get out of prison, her depression finally overtakes her. She ends up in the Emergency Room after a failed suicide attempt. Here she encounters Doctor Jonathan Banks (Jude Law).

Jude Law doesn’t seem a likely psychiatrist, but it doesn’t matter as he pulls off the role well, and all the other characters fall into line around him. Although Jude Law is the heart of the film, Soderbergh is undeniably at the helm here. He is the brain. Soderbergh’s characters habituate their New York City with 100% believability. The  authenticity of their performance at times was downright haunting.

The viewer envies the characters and their glamorous lives, even more so as they destroy themselves. The viewer needs to remind themself that these characters do not exist, and this is a fiction, be it an excellently written one by Scott Z. Burns. As a screenwriter I watch this film as a lesson in how to build intersecting plot lines.

Banks comes across as a doctor legitimately interesting in helping people, so when Emily claims to be living in a depressive fog Banks takes on the task of trying his best to help her. Emily’s condition begins to improve, but in the midst of the improvement tragedy strikes, and it threatens to bring down both patient and doctor.

As a psychiatrist Dr. Banks did what psychiatrists do, he prescribed drugs. Then more drugs. Then even more drugs. Even though it seems absurd at times just how many medications are being doled out, for anyone who has ever experienced psychiatric treatment, they will realize that these procedures are standard. So is this a jab at psychiatry’s habit of throwing handfuls of pills at people in mental distress? However mind-boggling it may be that the treatment for nearly every mental condition is medication, this film doesn’t come across as serious critique of psychiatric drugs, or the pharmaceutical industry.

There is a fog covering the whole film, figuratively in the melancholic tone, and literally in the shades of grey of the cinematography. This fog further complicates an already complex plot, but once you can piece together what has occurred, as I did hours afterwards, you will not be able to shake this film’s dark presence.

In the end it is not drug use that is being criticized here, but rather the avaricious soul-sucking void, the characters’ needs to engulf their surroundings, and the sociopathic culture that made them this way.