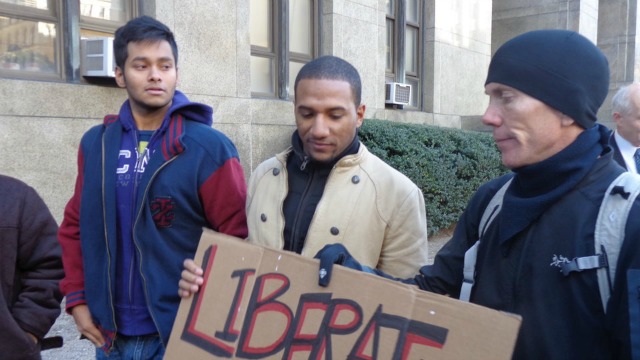 CUNY pressed the charges against the two last week, stemming from their roles in recent struggles against the closure of the Guillermo Morales-Assata Shakur Student & Community Center. The Manhattan District Attorney jailed Sourov and Vasquez in the 24 hours before their trial began.

The two were released on their own recognizance, ordered to return to court on January 9th. Attorney Ronald McGuire spoke alongside the two outside the courthouse afterwards, which The Campus captured here.

“This is the beginning of what’s going to be a real. long arduous battle,” McGuire told the gathering crowd. “But it’s really a battle to free CUNY, and that’s what they’re fighting for,”

Speaking on the upcoming faculty-disciplinary hearing for Sourov and Vasquez this Friday, McGuire revealed the CCNY administration reneged on a decision to hold the hearing in a larger space.  “CUNY has said they’ve granted an open hearing, but they put us in a tiny room where there’s only 20 seats,” he revealed.

“One very unprecedented thing about this case is that their disciplinary proceeding is still going on,” added Mark Yu, their second lawyer. “Before that was even resolved, CUNY allowed the District Attorney to come in and file criminal charges against them.”

Though limited in what they can say because of ongoing litigation, Sourov and Vasquez told The Campus that they will remain fighting.

“I’m not scared of anything they’re trying to do, because these are bogus charges,” Sourov said after the crowd had dispersed. “We have the support of the entire community within CUNY-which is the professors, the students, the student organizations and the communities that surround the colleges.”

“These are the people that want their children to have access to CUNY someday. They’re gonna have our backs, so I’m not scared.”

The jail time didn’t faze Vasquez in the slightest. “To be honest, this is my third time in the Manhattan bookings,” he said. “I’ve been to the Bronx booking twice, because as a working class, Afro-Latino, its nothing new. ”

“Being inside again, seeing the pettiness of the states and how they repress our communities, it reminds us what we’re struggling for.”

Sourov and Vasquez’s Friday hearing will begin at 10am. A rally is being planned outside the college around the same time.