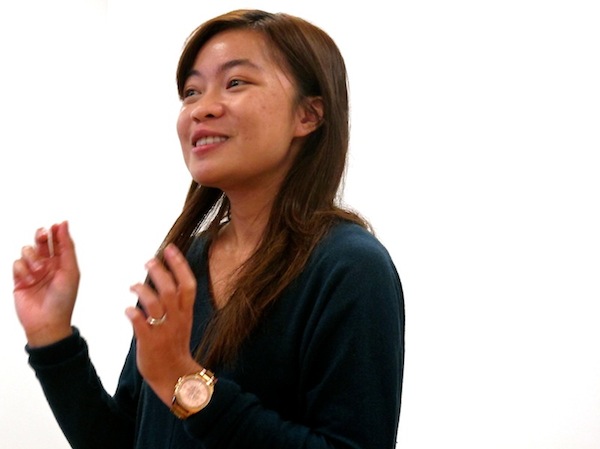 A little over a decade ago, a 10-year-old Indonesian girl received a huge surprise: free tickets to her country’s version of American Idol from her aunt, an advertising media planner.“What a job! Such good perks!” the little girl thought to herself. This moment, 14 years ago, is what made Raras Nikentari decide she wanted to study media communications to get into the advertising field.

The soon to-be-graduate of City College is married, a Group M scholarship winner, and also a global media intern at a large agency. Now 24, Nikentari spoke to a class of City College journalism students on Thursday, November 14, about her journey. And what a journey it has been!

But her success hasn’t been easy, especially as an immigrant who has struggled with mastering English. “Actually I’m very nervous right now,” Nikentari shared to the group of 20 students. “English public speaking is the biggest challenge of my life especially as a communication major. I took this opportunity because I really wanted to overcome this challenge.”

Nikentari says she is always looking for opportunities to improve herself. An intern at MEC, a division of Group M, Nikentari says she’s interested in being involved in the company’s work in Latin America. “That is going to be a big big challenge. I know nothing about Latin America markets,” she admitted, “but it will give me more skills for the future.”

Even as she prepares to graduate this winter, Nikentari praised her years at CCNY.“Being in a diverse environment really helped me be more open-minded,” she said.  “Brands want to target different kind of people, [so] you have to know other cultures.”

After Nikentari graduates she wants to stay and grow with Group M. “I love what I’m doing,” she says. “Real life is out there, and I’m excited.”