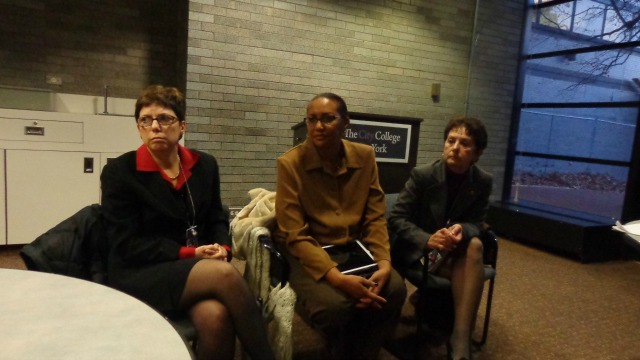 President Lisa Staiano-Coico and select members of the CCNY Administration held a roundtable discussion with students in the NAC’s dining hall Wednesday afternoon. Things quickly grew tense as students grilled her and co. over their seizure of the Guillermo Morales-Assata Shakur Student & Community Center, promoting the group to abruptly depart before answering more questions.

Lisa reiterated that NAC 3/201 was appropriated as necessary space to expand the college’s Careers and Professional Development Institute. She also boosted plans for a replacement “Urban Office.”.

“We really felt that that space could be used for career development, and it’s a space that’s suited for that,” she told attendees. “Where we are presently is that we are looking to continue the community services that we’ve had in that center.”

The planned office would be governed by Karen Witherspoon, CCNY’s VP of Government and Community Affairs, Lisa revealed. She also said it was approved by the CUNY Board Of Trustees. And a location has reportedly been found.

“I do want to see those same kinds of community services that were available in NAC 3/201 still be available in this new urban center.”

When asked if she thought the 1969 and 1989 student struggles that won open admissions and the Morales/Shakur Center, respectively, were a good thing, Lisa admitted she wasn’t well read on the history.

“I don’t know the 1969 [event], I’ve gotta be honest. I’m not in support or against [it],” she responded. “I think what happens is we evolve the times. I think right now, we need to be providing more community services in a larger, organized way to the community.”

Another student chided CCNY VP of Communications and Marketing Diedra Hill for issuing a press release about the center, while not knowing its history. “How do you think that the actions on October 20th-of not notifying any directors of the center-going in and seizing property-how do you think that fits in with your whole platform?” the student inquired.

“What would ‘doing it better’ be like?” the student responded. Juana Reina, VP of Student Affairs, then took the reigns from Hill.

“We always have to make decisions all the time. We know in hindsight that the communications-when we have to make changes in space, we have to communicate with people differently, and you’re quite right about that,” Reina conceded.

Next up was Alyssia Osorio, who was the Morales-Assata Center’s former director. “You spoke about a Board of Trustees-approved space. The center was won with a contract with CUNY,” Osorio began.

“There wasn’t a contract-at least I’ve never seen a signed contract, and I’ve asked for it,” Lisa briefly interrupted.

“I was a student director of the center and I think it’s really frightening that City College didn’t inform me of what was going on,” Osorio continued.

“I think it’s really indicative of the way City College is going, because when I spoke to student government, they had a million ideas for spaces that the Career Development Institute could have that wasn’t our space-that was unused space on out campus.”

Osorio also brought up Reina’s statement about her recent removal of RSCC members Tafadar Sourov and Khalil Vasquez from campus, though Reina denied they were suspended.

“There is no statement, because they have not been suspended,” Reina said. “So you haven’t heard a statement.”

Another student disagreed with Reina’s claim: “I’ve seen the letter where you say he’s suspended.”

“What the letter says is that the college can, in any circumstance whatsoever, remove someone right away if it looks as if it could be something dealing with violence, pending due process,” Reina counteracted.

The meeting’s climax came from the group’s admission that the Urban Center was Board Of Trustees-approved. “Why do neither of you know anything about the situation, and you are are like, the two in charge of this campus?” a student leveled at Reina and Staiano-Coico.

“What we are saying is that we know that you are angry, and we also understand there’s a lot of history and deep meaning here,” Reina said. “A decision has been made. It’s not going to be reversed.”

The room soon filled with demands the admins reveal who ordered them to close the Morales-Assata Center.”Who made the order?!” students repeatedly yelled.

“You can’t even tell us who made the decision, ” a girl noted. “That’s all we’re asking-you can say yes or no.” At that point, the four abruptly got up and left, to chants of “Shame!”

After they walked out, local community activist Shaka Shakur told the crowd that the National Black Theatre will be holding a safe-space meeting for activists in the fight Saturday at 10am. The Theatre is located at 2031 5th Avenue; visit nationalblacktheatre.org for more information 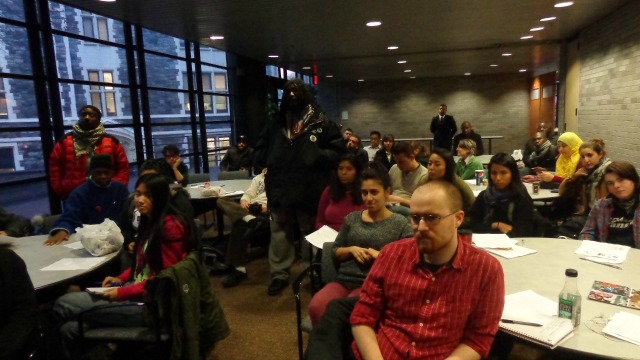 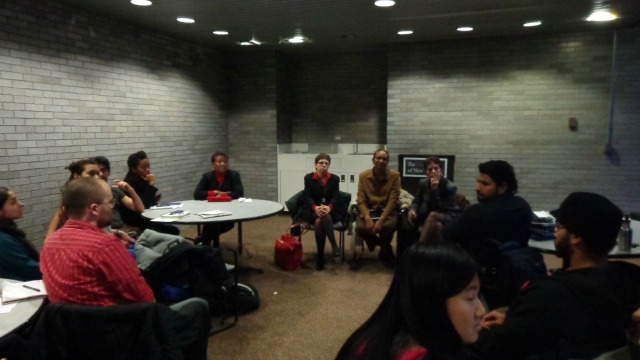