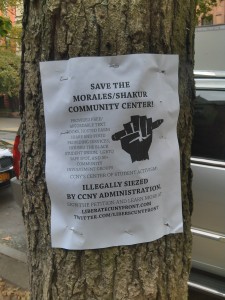 For all that has been done and protested in this particularly tumultuous semester in CUNY, no action has met more institutional controversy and ideological unity than City College’s closing of the Guillermo Morales/ Assata Shakur Community Center (MSCC). Aside from its history, its name, and its existence, the center proved to be more than just a clenched-fisted quirk on the south side of the NAC. Behind its red doors a broad community thrived in assembly; a book exchange was facilitated for students with financial need, a farm-share fed Harlem’s most impoverished addresses, and political dissent was administered by a broad coalition of both institutional and revolutionary students.

The debate and admonition created by critics, shaming the college for the existence of the MSCC, was ignored by the community the center served. Mainly due to the importance and necessity of the services provided. But on the night of Saturday October 19th, City College seemed to have had enough and claimed the space to expand its Career and Professional Institute.

No message was sent to the director of the center, all the property inside the space was moved to a safe space in-presumed- Shepard hall, and security began to increase on the twilight hours of Sunday October 20th.

As expected, the center’s community united in protest against the college’s action. But while coordinated protocol followed suit to an arrest, something strange happened. The entire North Academic Center was shut down. The college’s library, whose hours ironically were extended for midterms to serve a 24/7 schedule based on victories from the activists who organized in the MSCC, was shut down. Students inside the NAC were stuck without exit. The protesters, now growing in numbers with angered students wanting to study for their midterms, were demanding answers from an increasingly dodgy Public Safety.

Note that this piece is not just being written to detail the events that transpired during midterms week, but to highlight a disturbing trend in our college and our university system. Measures have been drafted by the Board of Trustees to regulate and update the University’s policy on expression. Behind a cautious message of respect of freedom speech, the Board is set on passing new rules in which protests can be administered. These measures aren’t just affecting students who participate in dissent, but faculty who stand in solidarity.

The central executive body of CUNY intends to do what the Democratic and Republican National Committees have done in response to protests, the implementation of regulated free speech in the vicinity of the campuses. Calling it ‘The City University of New York Policy on Expressive Activities,” the current Board of Trustees will approve a plan that further expands the role of the New York Police Department inside the University, and through broad legal language enforces, “making loud noise that seriously threatens to interfere with classes,” absolutely prohibited and “may refer the matter to external law enforcement authorities” (CUNY, 2013).

This policy effectively shuts up the protestors CUNY-wide, which I can imagine is the point and is supported by the people who are annoyed by the flare of sudden anger against the school. But that seeming annoyance, that complete rejection of expression and speech takes away what makes our system valid and democratic. It criminalizes speech and it creates a wall of authority against criticism over a system that deserves to be criticized.

What supporters of these measures don’t understand is the full extent of the promise of democracy. They pretend like democracy should be a front-page Vogue catalogue of civilized dialogue, when in fact the notion could not be further from the truth. The truth about democracy is that democracy is ugly, its edges are rough, and democratic dialogue is often coarse and divisive. But it’s the process of refining those course edges that builds a more perfect democratic union.

For the sake of order and authority we should be very cynical to motions that offer the easiest way out. Agreeing to these measures is the easiest response to a more systemic problem. From collected experience I can tell you that the protests are not being administered by people who want to create willing chaos, they are trying to make a statement to the student body and the New York taxpayer, a statement with a message to the problems we deal with everyday in our college, a message that places focus on the payment rates of CUNY’s top officials, some who make more than the President of the United States.

Students are choosing to protest based on rising tuition, and an increasing $300 yearly dollars that don’t seem to go to fixing our mediocre facilities and employment programs. Protesters have every right to also focus on the uncomfortable role of the military in our school, a valid response when military action faces record skepticism across the board in the United States and ROTC suddenly comes back after 40 years.

When these problems are so flagrant in our schools, when the access to education is met with more struggle than it’s worth, this public institution deserves to be subject to its constituency. When a community center offers more alternatives to a more affordable education than the school, and this community center is closed down at the dead of night, its only crime being servicing its community, the constituency is more than entitled to demand answers. That’s the difference between CUNY and a private institution like Columbia. CUNY offers a public service and it is subject to our constitutional laws at a more direct level. CUNY’s share of the taxpayer’s burden leaves them also subject to be responsible to the success of their institutions. Threatening their employees, and their student body, with authoritarian measures to quiet them down also subjects the taxpayer with these motions. Us, the taxpayers and residents of New York, have every right to protest and demand answers and not hold us subject to flagrant violations to our laws.

Instead, the subsequent reaction to the appropriation of the space led to public safety shutting down the NAC several times and subsequently arresting of an unrelated student trying to leave his own school. In fact, the failure of leadership and communication with one group of students should never castigate an entire student body.   We should be outraged at the school’s decision to suspend two of its students, whom had every right to organize and protest peacefully. The same way we should keep our direct public officials accountable, we should direct our ire at the larger system. Because the unelected CUNY Board of Trustees’ failure to address systematic problems in their system should never punish the constitutional liberties of the larger CUNY community. Leave the protesters alone.