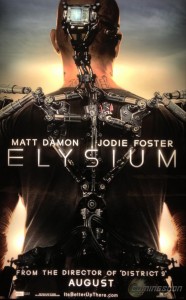 Within the overall ranking of great film, there is a sub-section of great reserved for awesome science fiction, a genre often overlooked as being too reliant on special effects. This blog will begin with a review of such a film.

In 2154 Earth’s wealthiest have abandoned the filthy scourge that has become our home planet and taken up residence on Elysium, a Garden of Eden type space station equipped with ultra-advanced medical technology. It’s all just a quick shuttle ride away from Earth: close enough to be realistic, but just outside the reach of masses.

Matt Damon plays Max, a heavily tattooed former criminal trying to get this life back on the straight and narrow, but the Los Angeles of 2154 where he resides makes it difficult. After a run of bad luck he is dealt a deadly dose of radiation while working at his factory job.

From here Max’s only chance of survival is to get to Elysium. Conveniently, Max just happens to be on a first name basis with Spider, a mastermind hacker crime boss that has the means to get Max there. After an unpleasant scene where Max is fused with a robotic exoskeleton, all he needs to do to attain his passage is hijack a corrupt official’s brain and download the data to his own.

The dismal picture that Neill Blomkamp (Director, writer, and co-producer) paints of our future as a species is grim, although slightly glorified. His Los Angeles 2154 resembles the favelas of current day Rio de Janerio, hardly a fictional dystopia, and although Damon is a pleasure to watch amidst this dystopian fiction, his overall goal of trying to save his own life is not enough to garner sympathy. It is difficult to care about the worth of a single ex-con’s life amidst the pandemonium and violence that everyone around him also suffers.

This disconnect never really resolves itself despite an attempt: Max ends up trying to save his childhood friend, and her daughter too. It doesn’t work, but it also doesn’t matter. This film is about wholes, big pictures, sums of all things greater than the individual. The technological marvels of Elysium are matched only by the decrepitude of the world that Blomkamp creates. A statement has been made loudly about humanity’s potential trajectory, lest we decide to alter it.