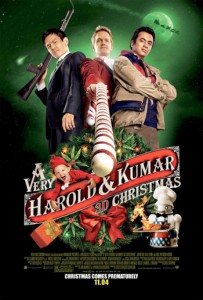 Christmas came early for me this year. I didn’t know there was a third part to the franchise, so finding out about A Very Harold & Kumar 3D Christmas made my month of November. (I watched it on the fourth of the month, so…)

This particular installment of the Harold and Kumar series, the third of three, takes place over an entire day just before Christmas. After Harold and Kumar’s last adventure, Escape from Guantanamo Bay, it seems the duo had become estranged. Since then Harold has grown-up, given up the stoner life, and become a respectable citizen. Then, out of nowhere the good ol’ Kumar shows up and burns down Harold’s Christmas tree with a massive joint. Harold desperately needs a new tree, but finding one is not as easy a task as it sounds. Their adventure begins.

What ensues during the quest to find this tree is either comic genius or just utter crap. I propose it is solid mix. First, there is a toddler that gets high on at least three types of drugs. Then Harold and Kumar themselves get drugged, drugged into a random “claymation” sequence in fact where they are almost killed by an Abominable Snowman. Then, they almost get killed again, this time by some gangsters.

Thanks to the veritable array of ethnicities in the film there are some hilarious race jokes that come across nicely, but the highlight of the film must be when Harold and Kumar have a run in with “America’s Sweetheart” Neil Patrick Harris. Yes, the Neil Patrick Harris.This is his third appearance in the Harold and Kumar franchise, and also weirdest because in Guantanamo Bay, Harris was killed with a shot gun by hookers.

Post-credits in Escape show Harris getting up off the lawn having survived multiple shot gun wounds to the back. No mention of NPR’s miraculous survival is made when the trio are reunited in this Christmas film, but we assume he must have had massive surgeries and lots of rehabs in between films. Let us all gives belated thanks and gratefulness, especially at this time of year, for the miraculous return of Neil Patrick Harris to the Harold and Kumar franchise