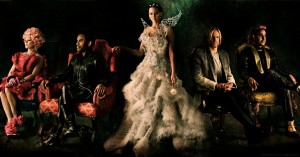 The fact that the Hunger Games stories are not crushed by their own weight is mystifying, and an achievement.

It seems crazy that a film whose ideology is as savagely brutal as the fictional Games would become such a hit. Despite all its violent connotations and tyrannical regimes, the film comes off as the year’s pinnacle of entertainment. Maybe the allure lies in ourselves? We project ourselves on screen. We are Katniss fighting back against the oppressors. The film’s core audience is essentially the same demographic that would be sacrificed if such games were ever to become a reality, so maybe everyone is really just preparing for the future? Perhaps when the Games start, we’ll know what to expect.

According to IMDB, Post-apocalyptic thrillers are not particularly big money makers, the Hunger Games franchise being the only series that nearly approaches real commercial heavy weights. The first two Hunger Games installments together hold the top grossing spots in the genre, but even then, they don’t come near grossing anything like the top 50 overall films. Avatar and Titanic are the top two. Both have over two billion worldwide gross. Still, Hunger Games has a hard-core devoted fan base that rivals even Twilight.

At the Los Angeles premiere of The Hunger Games: Catching Fire, young fans camped out for three days just to be front and center on the red carpet, catching glimpses of the film’s stars.

The best scenes of the film visually were the ones shot in the districts. The New Yorker review describes these scenes like “Eastern-bloc depression…drained of vitality,” but Katniss is exactly the opposite. As a hero, she is so strong that she alleviates the aforementioned vitality drainage. Once we leave the districts, the filmmakers deflect the intensity of the subject matter using Katniss as a distraction. Katniss keeps the film from being engulfed into an R-rated abyss. I love R-rated abysses, but they don’t draw fans like Jennifer Lawrence’s strong performances in these PG-13 flicks.

Also, why are all the people in the capital dressed so outlandishly? How do they assemble for all public events in perfect symmetry? Why is the President’s only concern with the games? Doesn’t he have other duties?

What the story lacks in depth, and it certainly does lack, it makes up for in action-packed, well-shot scenes. Despite an appearance by Phillip Seymour Hoffman as the game-maker, the curves thrown at the participants in this rendition of the Games weren’t as exciting as the first film.

The most annoying thing in the film was Peeta Malark. He is a weakling and not an interesting character. On the battlefield he hardly contributes. He seems to function only as a male counterpart to Katniss in the political spectrum, as Katniss ends up fighting battles for two in the forest.

Overall The Hunger Games: Catching Fire was worth the price of admission, and at 2 hours 26 minutes, it flies by surprisingly quick.