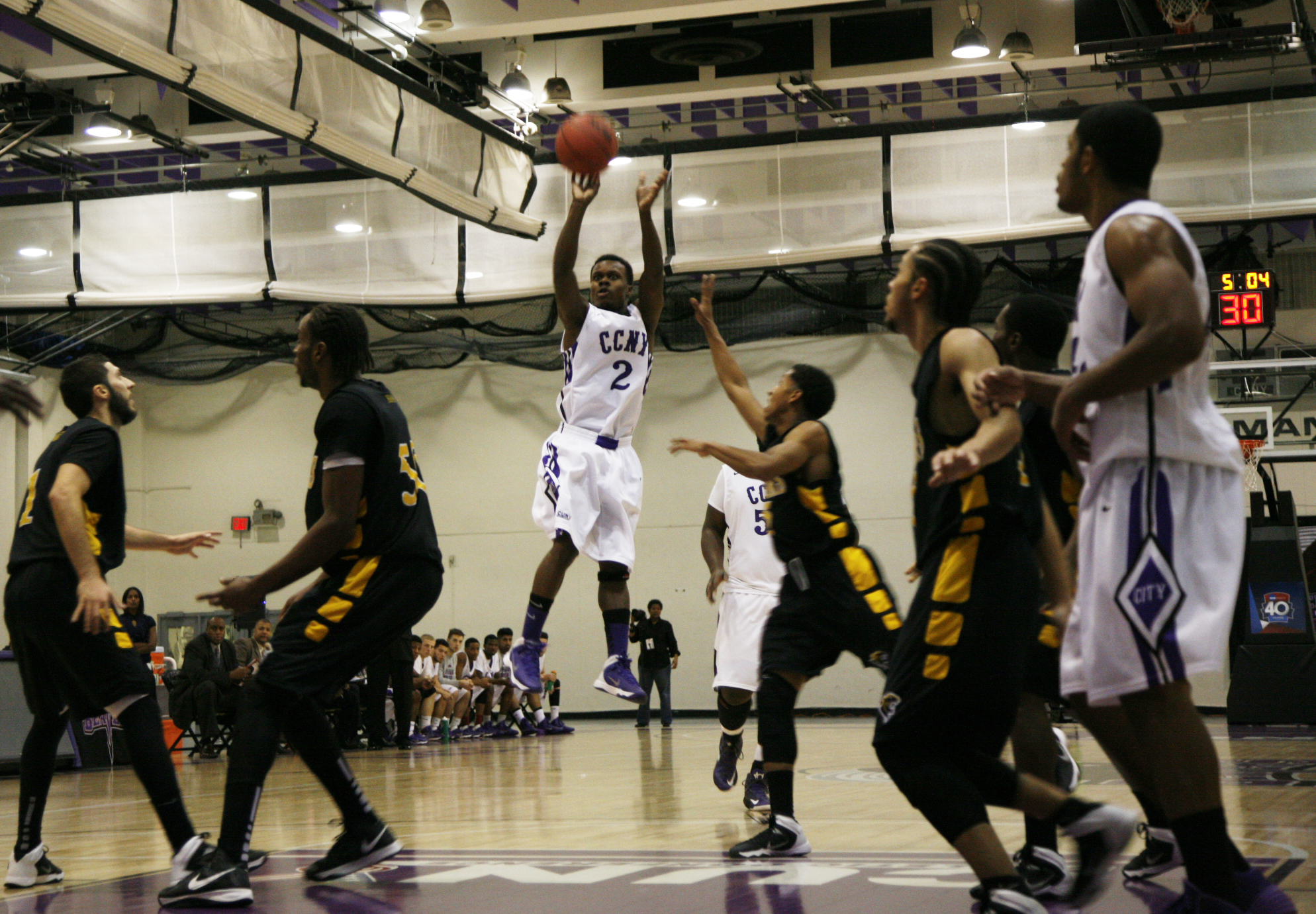 The CCNY Men’s Basketball team picked up a huge win against a struggling Medgar Evers Cougars team as they returned to .500 after defeating MEC 97-83 Friday night at Nat Holman Gymnasium.

“We didn’t come out with the same energy as we did in John Jay,” Green added.

CCNY also received a solid boost from sophomore Rasaq Balogun, who went 3-for-4 from the court for six points in a short nine minute shift, including a key block in the first half to hold off an MEC rally.

CCNY would take a three-point, 41-38 lead going into the locker rooms at the half and would hold on in the second half, going up by as much as 16 following a pair of dunks by Lewis on transition to cap the Beaver rally.

MEC junior Khalid Yousef scored a game high 38 points for the Cougars on the night, going 13-for-24 from the court including 4-for-8 from three-point land.

The Beavers will take on Baruch on Tuesday night at 7 p.m. at Nat Holman for the second for their three-game conference homestand.  The last time these two teams met, Baruch knocked out the Beavers in the CUNYAC quarterfinals, sending CCNY home with an 85-58 loss.

With a seemingly clairvoyant passing game, unselfish playing and soild defense to boot; Medger Evers were outgunned from the outset as CCNY dominates the Lady Cougars 70-25.

Losing the tipoff was of no consequence to sophomore Bria Fisher, who totaled 14 rebounds and and 13 points on the night.

She immediately stepped up and displayed her dominance: drawing a foul and sinking a basket in their first two possessions.

Karissa Core scored 14 points on 7-for-14 from the court with 14 rebounds and Giovanna Blanco sank 7-of-10 from the field for a team high 15 points with 15 rebounds.

Throw Taylor Pompilios’ and Jazmine Rogers’ spider-like-defense in to the mix, and City found its backcourt presence coupled with absolute dominance in the paint.

Coach Meadow was satisfied with the team effort stating that they’re “still in the transition of building a strong program, and this is a great foundation.”

With the emphasis and core values on teamwork and dedication, Coach Meadow credits her players for their hard work on and off the court saying that “our focus is on the team concept…and they did it.”

Now with back-to-back wins in the CUNYAC , the Beavers (2-4, 1-1) are looking forward to this Tuesday’s home game at 5pm against Baruch.