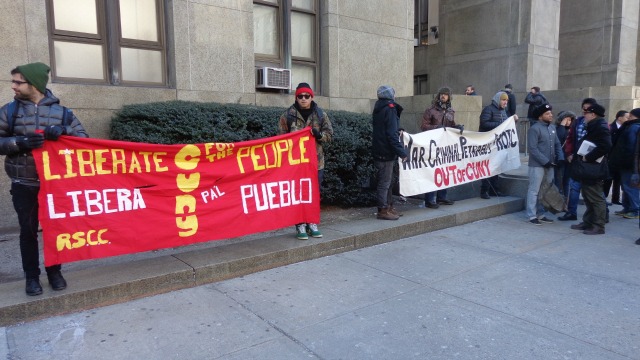 Thursday’s joint proceedings for the CUNY Six and Tafadar Sourov and Khalil Vasquez ended with the judge setting new court dates in the near future. However, they will receive opportunities to challenge the accusations against them, per the Revolutionary Student Coordinating Committee’s Facebook page:

“In court, the judge and prosecution denied every motion that our lawyers made to drop some of the chargers which are just completely bogus. They have granted us hearings so we will start preparing for those with the lawyers with witnesses, letters, etc. There is also a possibility for trial but the 6 will meet with the lawyers soon to figure out what approach we want to take moving forward.”

Speaking outside the courthouse afterwards, Ronald McGuire-Sourov and Vasquez’s lawyer-confirmed the two will contest some of their charges.

“We’re gonna make a motion to try to dismiss some of the charges,” said the former CUNY activist. “We’re gonna try to make a reply. So this is like the beginning stages of what’s gonna be a long, protracted legal struggle.” (watch part of the conference here)

McGuire noted that the prosecution has not offered any plea deals,  apparently out of the norm for these cases.

“Normally, in a normal criminal case where someone is charged with obstructing government process, or something like this, you would expect at this stage in the proceedings, there would be an offer to reduce the charges to a violation,” he added.

Rather, the Manhattan D.A.’s office said it needed more time to investigate the two RSCC students.

“So I think that building a political movement will benefit everybody’s case. Building a movement that’s really committed to having this case be resolved in favor of the defendants is also important. Historically, that’s always been the case-judges respond to other people.”

Given how social media is now admissible evidence in many court hearings, Deek also warned the students “to be cautious about what they’re posting on Facebook, as it would relate to the case.”

“At the end of the day, political power comes from the power of the people organized to confront the system and the oppressors,” Vasquez later told the small gathering. “The reason we’re being prosecuted, the reason we’re under the light is because the state has a legitimate monopoly over violence.”

“It’s gonna be very important for people to keep coming out to these events and more events,” Sourov added. “Not just to support those of us who are charged, but also because we represent an actual political movement with importance in CUNY and in New York City.”

The CUNY Six will return to court on February 18th; Sourov and Vasquez will return on March 11th. You can donate to the CUNY Six’s legal fund here. Picture The Homeless will also be hosting an open mic fundraiser for the arrested students January 17th in The Bronx. The address is 2427 Morris Avenue, Fl 2, and starts at 6:30pm. Contact rscc.nyc@gmail.com for more information.