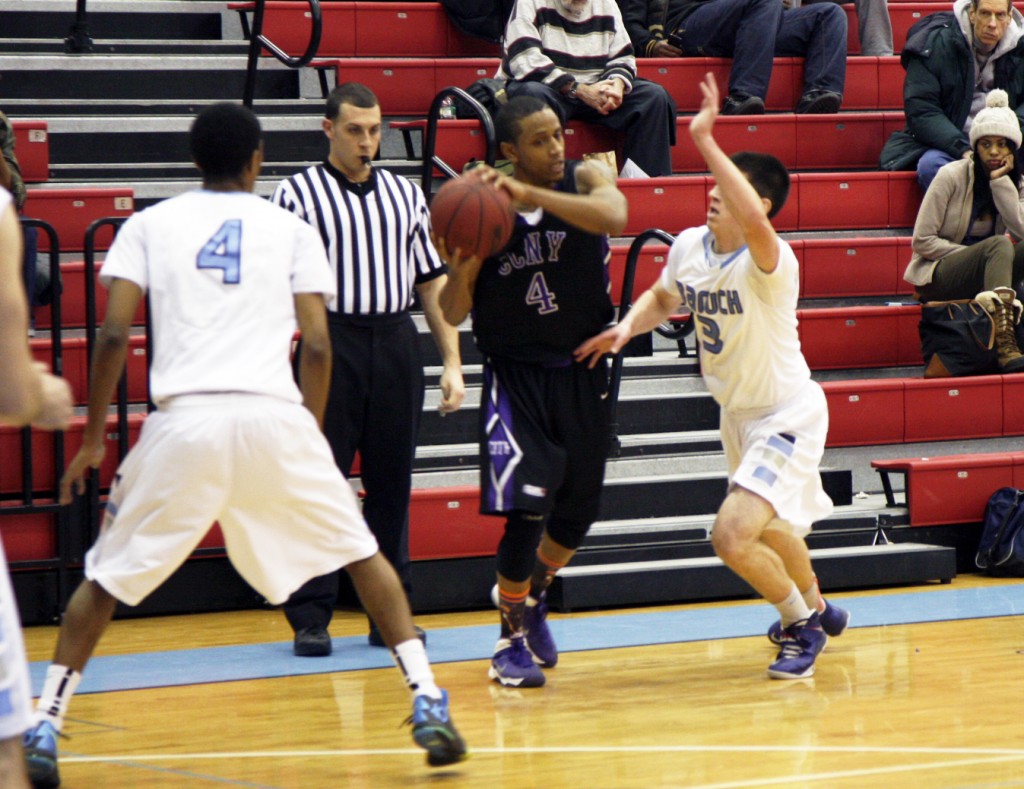 Lareik Taylor, along with the rest of the CCNY Men’s Basketball team could not get past the Bearcats pressure defense in their 59-48 loss at Baruch.
Photo by Jeff Weisinger

Maybe it was the snow, or maybe it’s the depleted, apparent worn-out roster.  Regardless, the fact that CCNY went just 1-for-9 from the court in the first 10 minutes of the game explains the Beavers 59-48 loss at Baruch College on Saturday.

The Beavers, playing with a depleted roster missing both Che McCoy and Anthony Lewis, who are no longer with the team, and missing both forwards Ram Chadha and Rasaq Balogun, showed their overall fatigue on Saturday in the Lower East Side as they just had no rhythm offensively, nor could put any string of points together on consecutive possessions.

“We’ve got nine guys, and we’re asking these guys to do a whole lot more and they’re giving their heart out,” said head coach Tom Green after the game.

CCNY (7-16, 3-11) opened the game with just one shot made in the first 10 minutes, a jumper by Saleh Nasser, along with a free throw by Lareik Taylor, to put the Beavers within one point, 4-3 early on.  But the one point lead wouldn’t last long as the Bearcats took off on a 7-0 run through the following 4:54 to take a solid 11-3 lead.

“We’re trying to find a combination that’ll put some points on for us from the perimeter,” Green added.  Damian Okon scored a team high 11 points off the bench, while Brandon Reeves score 10, however none of the starters scored in double digits with center Guilherme Brodt going 0-for-5 with no points on the night while recording two blocks and two rebounds.  The Beavers starting five went a combined 7-for-29 from the court on the night. 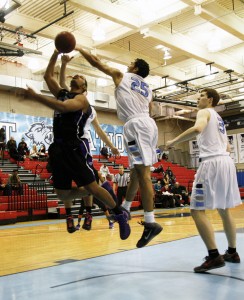 Even junior Jordan Ortega had trouble getting to the rim against Baruch on Saturday.
Photo by Jeff Weisinger

However it wasn’t all bad news for the Beavers on Saturday.

Defensively, they forced 16 Bearcat turnovers, scoring 11 points off of those, while holding Baruch to their third lowest point total on the season.  Saturday marked the third time this season the Bearcats scored 58 points (Feb. 3 vs. Brooklyn College, Dec. 13 at York).  They’ve scored just 53 points against The College of Staten Island back on Jan. 4 and just 49 against both Hampden-Sydney College on Dec. 30 and against Yale on Jan. 11.

Baruch took a commanding, late 16-point lead following Ryan Markoe’s three-pointer with 4:26 left in the game.  CCNY brought the game back within single digits, trailing 57-48 following a layup by Reeves with 2:39 left.

The road going into the CUNYAC tournament in two weeks doesn’t get any easier for the Beavers, who travel for the next, and final two games in the next three days, starting at CSI on Sunday at 1 p.m.  They’ll go to the Bronx on Tuesday to end the regular season at Lehman College at 7:30 p.m.  CCNY still holds onto the eighth and final playoff spot after Saturday’s loss, and still seems to be a lock for that eight-seed with two tough games left.