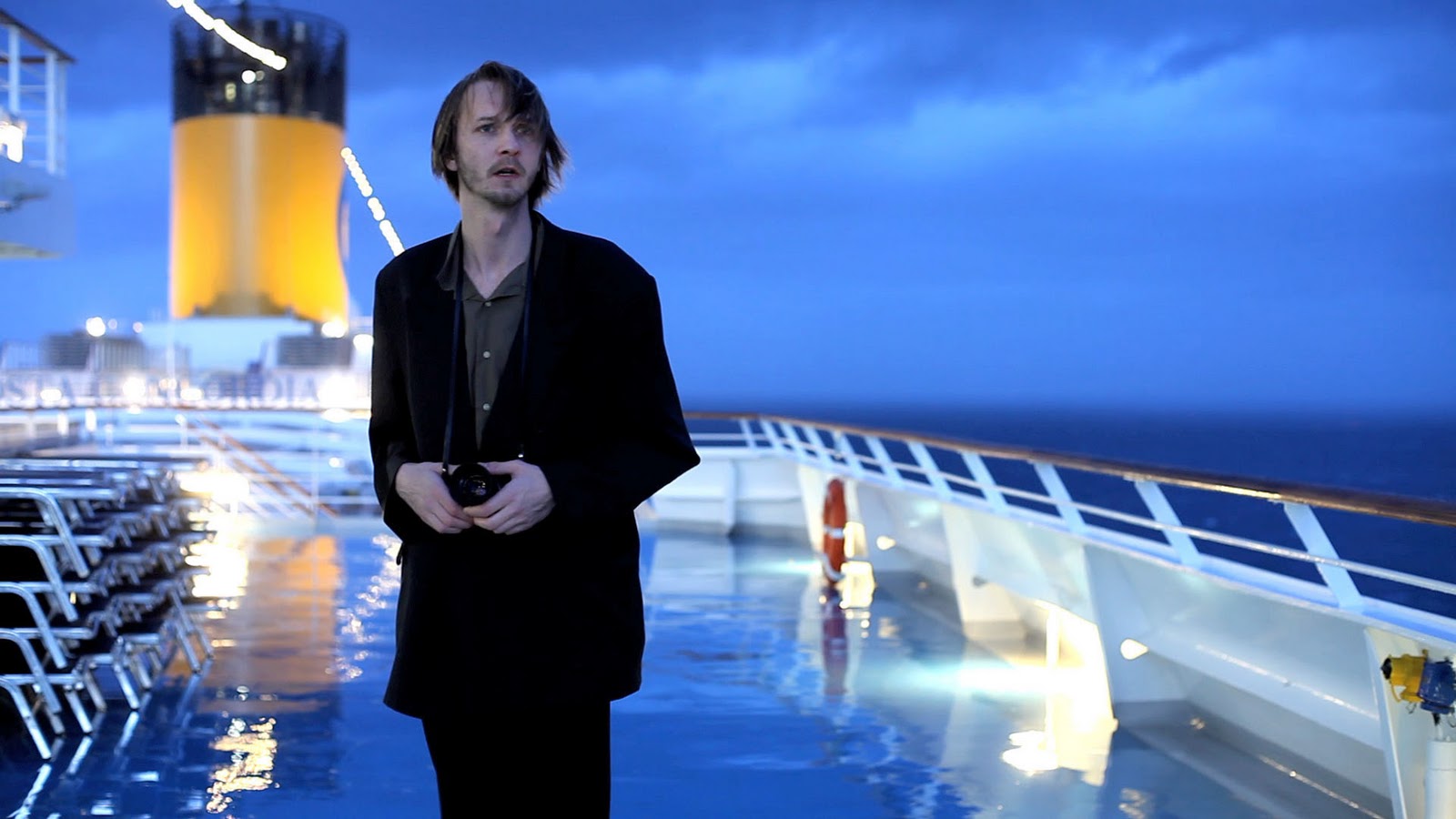 Jean Luc Godard’s 2010 venture, Film Socialisme, might be one of the most polarizing and frustrating films to try to make sense of in the last five years. Already possessing an enduring reputation as one of the giants of French New Wave cinema in the 1960s, he managed to befuddle, captivate, and anger critics with this latest work. Film Socialisme is an idea communicated in three chapters, with its culminating thesis hinging on the idea of language itself dying in the wake of technological consumerism. It uses the resources of cinematic style to deliberately obscure phrases and meanings, forcing the audience to draw as much from the visual imagery as well as its cryptic Navajo-English style subtitles. Despite being an exercise in video self-reflexivity – as it purposefully introduces technological errors and distortions – it is a complete deviation from classical Hollywood cinema. Across the three chapters presented in these 100 minutes, the most filmic elements of Film Socialisme are those that Godard deliberately ignored in a defiant attempt to illustrate the fragility of video communication.

The three chapters presented are: a cruise ship full of tourists in the Mediterranean Ocean, a mother confronted by her children on the meaning of Liberty, Equality, and Fraternity, followed by a somehow even more dissonant collection of historical images chronicling the rise (and signs of failure and fall) of civilization around the Mediterranean Ocean. Throughout all three chapters we are treated to utter fragmentation at its finest. If anyone on screen is speaking, they speak French, and the subtitles in English appear broken, schizophrenic, yet oddly relatable to the image on screen in a most tertiary manner. All sorts of camera firepower is used, from today’s digital cream of the crop to capture roaring waves, to seemingly early 2000′s cell phone video footage. This is likely the first thing that annoyed so many critics about the work. Godard seemed smug and pretentious to many for choosing to mix and match what would be a “beautiful” shot, with what would be an affront to an audience’s senses: grainy, pixelated footage with color bar negatives hanging around in the top of the screen. Instead of trying to make a statement with each deliberately placed ”ugly shot”, it is more likely Godard was upholding what he felt was the most prevalent theme of the film – and that is the fragility of visual language. Perhaps none of the ugly shots matter more than any others, but their collective existence and juxtaposition relies on each other shot’s place to assure a fuller effect.

Where most films attempt to set up a storyline and attempt to convey space and time in a logical way, Film Socialisme had no regard for any of those elements. Coherent conversations between characters are non-existent. Most appear to be delivering monologues, but the purposefully unhelpful subtitles can only make you infer (at best) what the subject of their diatribe is about. As a viewer, you will never know for sure what any person in this movie was talking about. You just have a very faint idea propagated by the visuals ahead of you and the four or five words that are in loose conjunction with one another. That further ties into the idea of video as a fragile medium of communication, one easily corrupted by a lack of direction or information.

There are not declarations of absolutes, but brush strokes of sentiments, of ideas, and of atmospheres. The non-diegetic music introduced for the majority of the cruise chapter indicates that Godard had some kind of strong feelings about Western culture. If it sounds like the music for a funeral and is juxtaposed with tourists who are drinking, but too busy with their cellphones to socialize with one another, then it might be reasonable to infer Godard was pointing out a degree of decadence or social complacency. In the second chapter, we are treated to a humorous sequence of cats meowing innocently at one another, and then at a human. The cats communicate flawlessly to one another (at least as much as we humans can infer), the human in the scene communicates to them effectively (garnering the response he was attempting to elicit), and yet, not a single human in this entire film can speak a full sentence in narration or dialogue.

As far as characters themselves, there are a couple of familiar faces that we seem to “follow,” but we don’t know any more of them than the aesthetic provided to us by Godard. How they dress is what you see and ultimately most of what you’re going to get, because anything that comes out of their mouths are open for interpretation. Although nothing can be proven to be a wrong interpretation of their musings or monologues, nothing can be proven to be correct either. This quagmire reduces the amount of people still paying attention to those who either teach or study film, as the average moviegoer does not have the attention span for this. Once again though, Godard did this purposefully. To some it may be endearingly consistent, to other it may sound like a lazy cop-out: that for every unnerving and seemingly egregious error, Godard smugly and decisively opted for what would shock and anger the forces that demand uniformity and linear structure in cinema. The desire to shock and be revolutionary was a significant component of his earlier work as well.

In terms of linearity, there is no discernable start or end to any of the chapters. We don’t see how the cruise begins or ends, instead seeing what the journey was about. The same goes for the family in the suburbs, and the last chapter was even more abstract, but profoundly political in its imagery. It’s clear that Godard is partly haunted by Europe’s checkered history with regards to Nazi oppression and warfare, as a good deal of the footage used in the third act is archival footage of World War II aerial and ground combat, as well as many stark images of Nazi symbolism.

When considering what aspects of reality Godard meant to portray, we should probably ask ourselves if he is trying to portray reality in any way at all, or if the portrayal of a perspective of society was on his mind to even begin with. The cruise and family chapters are deliberately confusing and perhaps intentionally ridiculous. The third chapter is more somber though, as the images of war are unforgiving and more importantly, they don’t appear ironic or mocking. Godard has no problem mocking fat white Western tourists on a cruise, but the dispatching of an Allied warplane in a massive aerial dogfight is given enough time to build suspense and reach its violent conclusion. Whatever he’s trying to say about the progression of society, and more specifically in his perspective, European society, it’s not praise or congratulatory by any stretch of the imagination.

Let’s think about the use of sound in this film: for HD quality shots of waves and landscapes that looked like they were captured on the latest 4K RED camera, we were also treated with conventionally high quality sound of water crashing and wind blowing.  Most people would agree that the combination of sound and visuals in those shots was up to par with typical high budget film standards. Perhaps this is why these felt like the calmest sequences in the entire film. The compositions used by Godard emphasize gargantuan distance (primarily in the cruise chapter) and relentless action by nature, and the sound happened to match these images very well. For the lower quality video shots, it became commonplace to hear the in-camera microphones blasting away, as decibel distortion over-represents what the wind sounds like. These deficiencies are immediately apparent and can be maddening even to those who know what to expect going in to watch this movie. What we noticed more is what was absent. Maybe that’s the point Godard is making: “You only start to miss it when it’s not there. Do you enjoy good sound quality? Do you enjoy truth-exposing picture definition? Too bad. I’ll show you what I want to show you, and you’re just going to have to sit there and watch it.”

One of the few sure things we can say about Film Socialisme is that its intent is brutal self-reflexivity, and its methodology in doing so is more brazen than most are used to. What we are not sure of is if it is Godard’s intent to insult the film industry quite simply, or to alert us all of a future in which language is methodically being weakened and destroyed by an ever-growing reliance on technology. Technology (especially digital) is a constant resource in the grasp of any human in either of the first two chapters, while the third chapter shows a great deal of how technology (particularly war technology) wrought devastation and genocide. By this point, a majority of us may be able to agree on the common denominator in this equation: digital technology. There may be love directed his way by those who perceive this as an honest warning for future filmmakers. Hate is also directed his way because this seems like a scorning, instead. Then again, he probably knew that was going to happen.