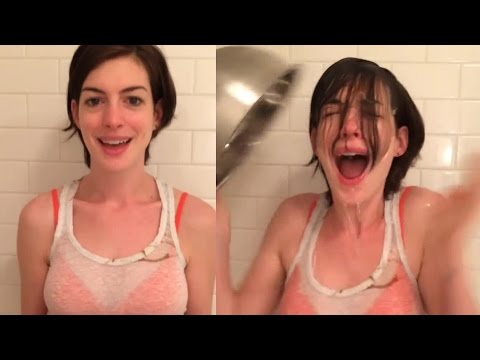 Since the Ice Bucket Challenge kicked off in July “activists,” including celebrities like Oprah Winfrey, Anne Hathaway (pictured from Instagram) and Justin Timberlake, have been able to raise nearly $100 million since July 29th. The money goes to the ALS Association which provides care for people with ALS also known as Lou Gehrig’s Disease. The City College community helped raise awareness by raising their own buckets.

During the school’s “Welcome Week” fraternity members filled their buckets with ice water, taking turns to capture the challenge for social media. But students weren’t the only ones participating.

David Covington, CCNY’s events manager, poured it on recently in front of the NAC. “I’m not going to turn down a challenge by my sister,” said Covington. He was scheduled for a flight to visit his sister in Chicago in less than 24 hours for her wedding, so he had two options: “I could’ve done it at home in my shower, which is pretty boring, or do it in front of the NAC,” he explained. So the NAC it was. 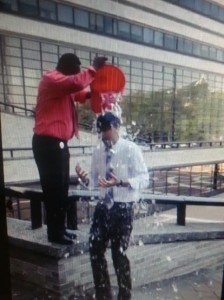 Covington loved the idea of the on-campus stunt because he believes the college needs more social media recognition. “There’s 150 performances at CCNY a year, and 1 full time staff member for social media, most schools have 7-50,” said Covington, who will soon take on the role as the college’s artistic director. Using the hashtag #ccny, he received responses asking about the institution and was able to educate many people about the programs and open positions. “People are definitely rethinking social media,” Covington added.

Students nationwide are still joining in on the Ice Bucket Challenge, and some more than once.

Alexander Opiendo, a senior at City College, has dumped on three times. “First I was nominated by a friend, then my girlfriend, who actually dumped me a while after,” Opiendo admitted. “It was fun at first, but the last one was messed up. I couldn’t imagine how that Bay kid felt,” Opiendo said in reference to the autistic student from Bay Village, Ohio who had feces and urine poured on him.

Despite the controversy and the nontraditional ways to get “iced,” the challenge remains booming with over 2.5 million posts on Instagram with the #alsicebucketchallenge, and 4.7 million results found on Youtube.