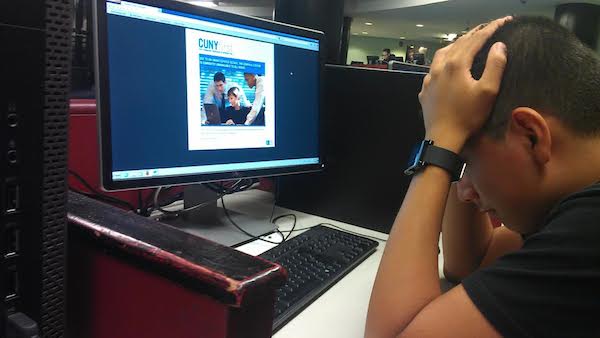 The only thing worse than CUNYfirst not working? CUNYfirst working badly

CUNYfirst has been causing problems for faculty, staff and students on and off campus since last semester. So when it went down the first day of fall classes, that was the last straw for many. The “unanticipated outage” made the CUNYfirst system inaccessible to “all users.” There were no instructions on what to do in this scenario.”

All I wanted to do was pay my tuition online and I couldn’t,” said Arjan Velovic, a student at the Grove School of Engineering. “I went in person so I could pay and not be dropped from my classes, but bursar didn’t help either. I hope this won’t be a problem, it’s not my fault I can’t pay!”

As a result of the CUNYfirst drama, students vented on social media to mock the unreliable system, including a Facebook page. Searching “CUNYfirst” on Twitter also reveals angry remarks. “So CUNYfirst not only makes it impossible to see a class schedule, but also leaks your social security number. Cool,” tweeted one user. Another remarked, “I haven’t used the Obamacare website but I assume CUNYfirst is worse than it.”

Since CCNY replaced eSIMS with CUNYfirst in the spring, the service has been unreliable at best. Everyone complains about the program’s confusing layout, small font, and loading time.

“CUNYfirst has been a nightmare for students, faculty and staff alike. It has created innumerable and serious problems for everyone,” said Harriet Senie, art history professor and director of museum studies at CCNY. “It is hard to imagine that the individuals who approved this system have ever had to use it.”