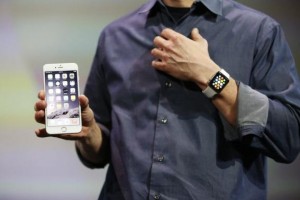 On Tuesday, Apple introduced two new iPhones and the Apple watch at a conference held in Cupertino, California. Called the iPhone 6 and iPhone 6 plus, the new iPhones are bigger, rounder, and faster than any of Apple’s previous iPhones. The Apple watch is the company’s first wearable device. It complements the new iPhones to display notifications and gives different options for a customized look.

As tech savvy college students here at the City College of New York, spotting someone on campus without an iPhone in their hand is rare. So with the popularity of what Apple has become among students, the unveiling of Apple’s newest products is something to talk about.

When asked on whether he is upgrading to the new iPhone, Rohan Patrick, 21, a senior and avid Apple user, said, “ Of course, it is a new upgraded system.” The new iPhones feature Apple’s new A8 processor, which is 25% faster than the iPhone 5. The iPhone 6 measures at 4.7 inches while the 6 plus measures at 5.5. inches. Adding, “Forget the iPhone 6, I am buying the iPhone 6 plus. Why go 50 when I can go 100.”

While some students here at City College wait for the new Apple products, others don’t seem to go for it. “Apples products are too extensive,” said Joli Eubanks, 20, an Ad/PR student on campus. “Samsung has really good phones and this is why Apple stocks have fallen. Since Steve Jobs died, their products are not as good. Especially with this new watch, I think they are just trying to prove that they are still on top.”

For those students interested in buying Apple latest products, both iPhones will be available September 19th. But if you don’t want to wait on line with your sleeping bag in front of the Apple Store or skip class, pre-orders begin on Friday, September 12. The starting price for the iPhone 6 is $199 for a 16GB, $299 for a 64GB, and $399 for a 128GB. The iPhone 6 plus cost a little bit more, starting at $299. While those who want to buy the $349 Apple watch have to wait until early 2015.