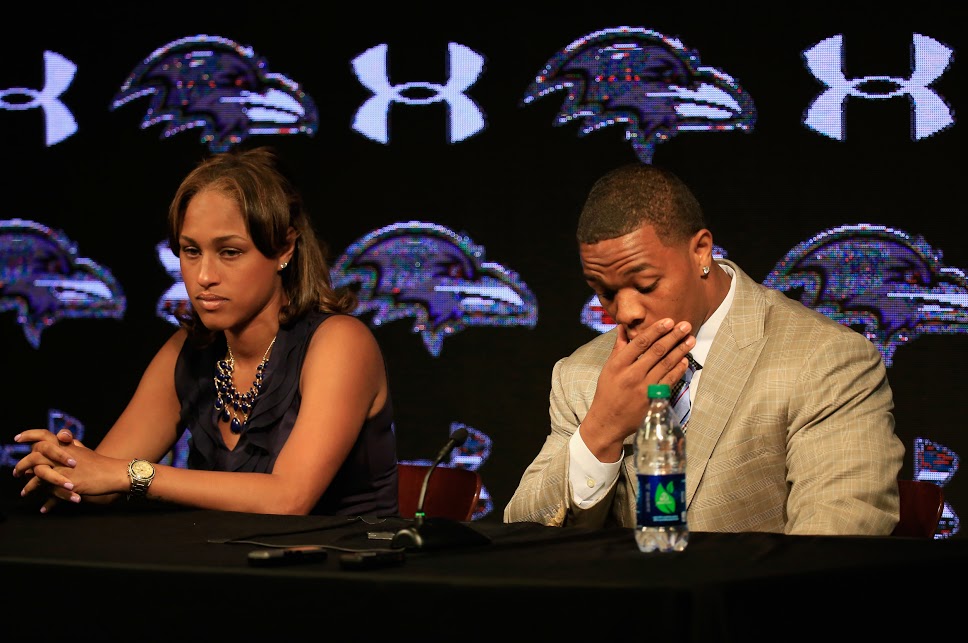 Ray Rice with his wife at a press conference

Scandalous stories of well-known NFL players have dominated the news. From Jets’ quarterback, Michael Vicks, involved in illegal dog fighting to New England Patriot’s Aaron Hernandez, charged with murder back in 2013, the list goes on and on.  More recently, Viking running back Adrian Peters was benched, accused of child abuse after punishing his child too harshly.

But it’s the Ray Rice situation that’s captured the public’s attention, including here at CCNY.

Earlier this month, TMZ Sports released a video–the second–of NFL running back Ray Rice punching his then fiancée and now wife, Jenay Palmer, inside the elevator at Revel Casino Hotel in Atlantic City on February 15. It shows Rice punching Palmer, who lunges after him. Rice hits her again, knocking her out cold to the floor. As the elevator opens, Rice drags unconscious Palmer out.

Many CCNY students expressed their shock towards the video, which has been millions of times. “I believe what happened in the video speaks for itself,” says ad/PR student Valentina Padilla, 20.  “There are exchanges of violent behavior by both people but what escalates inside the elevator is uncalled for. We are speaking about a football player, who is in a career working towards tackling 200 pound men.”

Problems are mounting for the NFL, which has brought in a team of consultants to look at its record on violence and sexual assault. According to USA Today’s NFL player arrests database, from January 1, 2012 to September 11, 2014, 31 NFL players were arrested on charges involving murder, domestic violence, battery, and assault. In the last two years, 14 of those NFL players have been arrested for violence against women.

While some students disagree with Rice’s action, others think both parties contributed to the altercation in the elevator. “I think people need to keep their hands to themselves,” says senior, Keevin Brown, 25. “They need to show all the facts. Yes, he’s a famous NFL player, but he was hit first. He should have not hit her back, but the media should show the whole story and not the parts that are convenient for societal norm.” Adding, men shouldn’t hit women, but women shouldn’t hit men either. Everyone should keep their hand to themselves.

Before, the NFL’s punishment regarding domestic violence was a two-game suspension compared to tougher penalties for first-time drug use. The public criticized the league about its response regarding Ray Rice. After the release of the second tape, the NFL suspended Rice indefinitely, while the Baltimore Ravens cut him off. The league recently implied new rules relating to domestic violence.The first offense is a six-game suspension, without pay, while the second would lead to immediate expulsion from the league. Anyone who is kicked out after a second offense will be able to apply for reinstatement after a year.

Although the NFL officials claim they never saw the second video, some think otherwise. “The tape was hidden. Everybody knew about it. The NFL Commissioner knew about the tape, but since TMZ released it he decided to take action,” says Ziggy McKenzie, a senior here at CCNY. “It is sad that he got to that state and knocked her out. I blame the woman also, because she is now defending him and the marriage even after he knocked her out.”