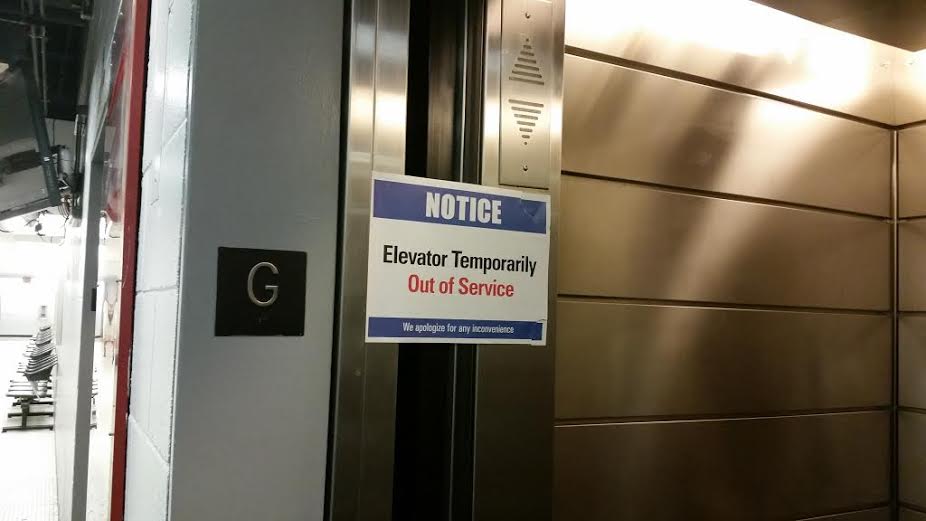 Not at CCNY with so many broken elevators

Construction at CCNY has always been aggravating, but when the chaos makes students consider missing class, the issue escalates to a new level. The elevators in almost every building of the school are currently out of order, and people are extremely frustrated.

The NAC building has four elevators and three of them are not working. Anthoni Sitton, a café worker at CCNY, says it takes him at least an hour to stock the store. “I have to push a cart from building to building with all the elevator traffic it makes my job nearly impossible,” he says.

The Marshak building has six elevators in one spot, and two of them are out of order. “Yesterday I was forced to walk up 13 flights of stairs at two o’clock,” says Norhan Ibrahim, a senior studying biology. “Everyone has class right after lunch and its way too packed to even try to fit. This disaster makes me contemplate even coming to class.”

Shepard Hall has one working elevator, holding on by a thread. Since it holds less than 10, most students opt for the stairs–still with a struggle. “It’s like a maze to get to class,” says Sally Abreu. “You have to walk up one stairwell, down a hall and cross over to another stairwell. Its incredibly frustrating, especially if you’re running a few minutes late.”

Many students are also expressing their anger on the CCNY secrets facebook page. A recent post included a picture of a student in wheelchair holding on for dear life on an escalator:  “If students are paying for tuition, they deserve to be able to get to class! ”

According to Facilities Services, after many service requests the problem is already being addressed. The first building to be worked on is Marshak Hall, and the NAC building is next. With midterms week coming up, let’s hope they’re up and running soon.