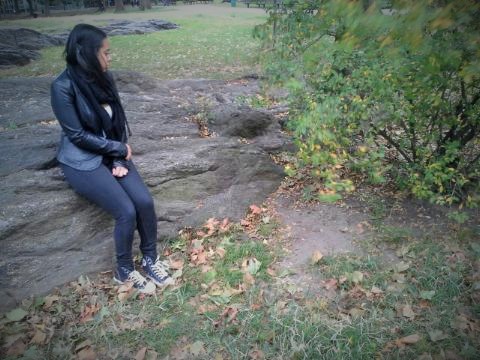 Fall weather may be triggering mild depression By Sally Abreu

As the leaves start to fall, the weather becomes cooler, and the nights become longer students are feeling the blues. BCC student Dariana Figueroa, 24, claims she’s miserable during the winter. “I feel really depressed,” she says. “There’s barely any sunlight and the streets look deserted.”

For others, waking up in the dark is tougher than it sounds. “When it’s still dark out, all I really want to do is say ‘nope’ roll over and go back to sleep” says Rodolfo Guzman, 23.

According to the National Alliance on Mental Illness, Seasonal Affective Disorder (SAD) is characterized by recurrent episodes of depression, usually in late fall and winter, alternating with periods of normal or high mood the rest of the year. .

Now, as fall is underway our sun sets at about 6:30 PM, compared to 8 PM during the summer. Having less sunlight can be a major contributor for people feeling blue. Guzman, keeps that fact in mind.“I know that it affects me so just the fact that I’m aware of it, I try not to let it bother me as much,” he explains

Late classes can be a problem.  “My first semester at CCNY, I would get out at 10 at night. To go home when it’s dark to waking up in the morning and it’s still dark–I don’t know, it does affect you,” says Guzman. “Everyone needs their sunlight, at least a certain amount and being able to see nature.”

Figueroa agrees.  “With some of my classes I have no other choice but to stay late because that’s when they’re offered,” says Figueroa. “I don’t like it.”

Others, like Sumaiya Ahmed, 23, are accustomed to it. “In City my classes were really late; back in high school I would get out late so it’s something I’ve been used to.”

Winter blues also affect student’s social lives. “When it’s raining or really, really cold I just feel sad. I don’t feel like going out with my friends, all I want to do is stay home,” says Ahmed. “Even if I do go out I won’t dress up like I usually do. Something that helps me when the weather is bad, is being able to talk to my mom, cousins or friends over hot chocolate or tea. If I don’t see them for 2-3 weeks I feel like a robot going to work and coming home, just to do the same thing all over again the next day. It’s a good way to boost your mood” she said.

During the colder months, students should remember to take some time and enjoy the sun. “Keep in mind not every day isn’t the same,” Guzman adds. “Hope the next day will be better.”