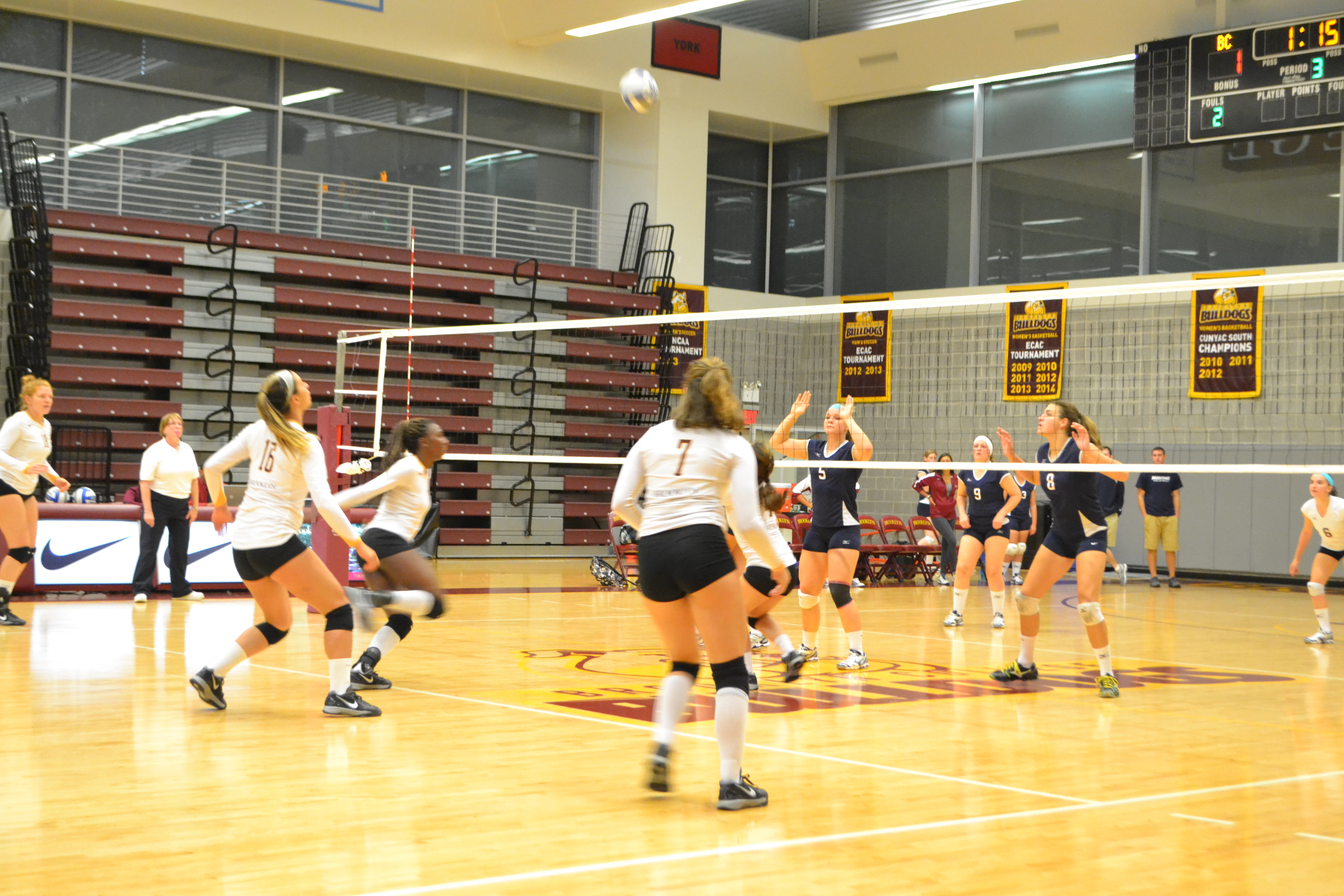 The Brooklyn College Women’s Volleyball team may have been away from their home court for only two weeks, but after losing six of their last eight away matches, it felt like two months.

So a sweep in front of the home crowd was that much sweeter.

“They’re like the seventh player on the court,” Brooklyn College Head Coach Joanne Riggs said, gesturing to the emptying crowd of 199 after the game.

The crowd was in full display through some back-and-forth stretches in the match, as the Lady Bulldogs (8-15), despite taking the first two sets, hardly won them easily.

Brooklyn and the Privateers (6-8) both went through long scoring stretches in the second set, rattling off consecutive points with ease early. Maritime led 2-0, then BC led 4-2, then Maritime scored six straight points to make it 8-4, then the Lady Bulldogs tied it with four straight points; no team could pull away.

Midway through the set, the Lady Bulldogs, who had already won the first set, looked like they broke Maritime’s focus and would take the match. After Shannon Brady rifled a shot down the right line to make it 10-9 in favor of the visitors, the hosts won six of the next seven points.

The Privateers, who made 14 errors in the first set, went through a stretch of errors in the second set. Carly Lombardo’s shot went ten feet straight out of bounds, and Brady hit a short shot that failed to reach the net, as Maritime committed four errors in seven plays.

Down 15-11, the visitors called a timeout and headed to the bench as the Brooklyn crowd roared.

But the timeout seemingly got Maritime back in the game. The Privateers won seven of the next 11 points.

Down 19-15, Maritime College won three straight points. Brady blocked a hard shot from BC junior captain Sasha Roopchand at the net. Then Brady went on offense, sending a kill from close to the left line into Brooklyn territory.

Down 19-17, Gabrielle Kempski notched an ace to make it a one-point game again, forcing Riggs to call a timeout.

“They made a lot of mistakes. So did we; we let them in,” Riggs assessed.

The two teams then went almost completely back-and-forth, splitting the next four points.

Riggs called another timeout as the crowd groaned when Maritime tied the game, 22-22, on the next two plays. Brady’s high-angle shot just fell in-bounds close to the left edge, and a LoCascio’s blocked ball fell instantly out.

Maritime went down by two and tied it again, this time 24-24, but that’s when the Lady Bulldogs took the match in their own hands. BC’s Yelizaveta Malysheva made it 25-24 when she placed a shot close to the line and down into an open spot in Maritime’s defense. Then after the Privateers tied the set again, Lombardo’s running dig going away from the net couldn’t reach back over.

Roopchand then sealed the win on a shot that a diving Maritime player couldn’t dig, giving Brooklyn the second set, 27-25.

“Sasha was put in that position because of her leadership,” Riggs said, referring to Roopchand’s captainship. “She set the pace.”

In the first set, the script was almost the same as it was in the second, as Maritime won six consecutive points after Brooklyn College took the first four.

Down 15-11, though, the Lady Bulldogs seemed to smell a chance to take command, as Kempski and Brady made errors on serves and shots, respectively.

Then leading 16-14, Kempski’s next shot went into the net, and Christine McCormack’s shot on the right side went straight out, tying the set.

After Roopchand equalized the set 17-17, the Privateers committed four consecutive errors to fall behind 21-17.

“We definitely capitalized on their errors,” Riggs said. “[It[ gave us a little bit of a push.”

But Brooklyn still couldn’t run away with the set; they lost four of the next five points, and the hosts led by only 22-21. After Butler’s kill went into the far right corner to make it set point, 24-22, Roopchand made an error and then Brady had perhaps the play of the match, looping the ball over despite going away from the net.

To counter losing the lead again, Riggs subbed in Victoria Marrazzo. On the very next play, Kempski’s serve went directly into the net, sending the BC crowd into an anxious roar as they looked for the Lady Bulldog’s first set win at the West Quad Center in two weeks.

Fanny Ng rewarded them in style, serving a changeup that Sydney Carella couldn’t get to in front of her, giving Brooklyn the set 26-24.

Ng and Yin made the final set a mail-in for Riggs with three aces each, as the Lady Bulldogs played their best volleyball up 2-0.

Down 5-2, BC rallied off six consecutive points that included three Ng aces.

Yin then joined in on the fun and recorded three aces in a long stretch in which the home side, after they led by the slim margin of 12-10, won 11 straight points.

“Third set, we protected our server, making less errors, and we played our game,” Roopchand said. “It’s all momentum.”

BC ended Maritime’s misery when McCormack made an error on the last play, and Brooklyn won the third set 25-11.

“We capitalized on their free balls with our passes,” Riggs said. “[We were] able to run the middle.”

Brady recorded more kills (20) than the rest of her Maritime College team combined, to go along with 12 digs. Carella of the Privateers led her team with 16 digs, Kempski had four aces and nine digs, Lombardo assisted 14 times and got nine digs as well, and McCormack got ten assists.

The Lady Bulldogs have a combined 6-13 record in away- and neutral-court matches this year, but went to 2-2 at the West Quad Center with the victory.