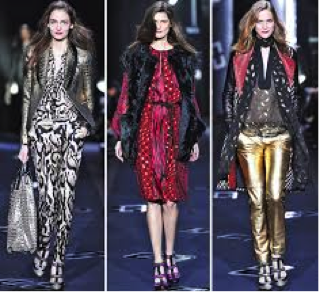 Last month was New York Fashion Week. Every year, notable and nouveau designers alike bring their looks to the runway. NYFW, as it’s been dubbed, has been a staple of the fashion world since 1943, and the event now attracts fashion editors, fashion bloggers, celebrities, artists, musicians, and aspiring fashionistas from all over the globe. Although the shows presented looks for the Spring/Summer 2015 season, some elements originated from the Fall/Winter 2014 lines. Nonetheless, many of the runway looks for women were wearable and effortlessly chic.

The top show of this year was delivered by Ralph Lauren, the first couturier to premier a four-dimensional fashion show. The show took place at Central Park’s Cherry Hill. Some of the notable attendees at the Polo Ralph Lauren women’s line show included Julianne Moore, Andre Leon Talley, and Anna Wintour. The line was chic and simple. Black and white attires opened up the show, leading into vibrant greens, yellows, blues, and transitioning to earth-tone beiges and browns. Yellow, green, and a lot of black and white were the coloring styles Diane Von Furstenberg showcased at her Spring/Summer 2015 show. The line was bright and flirty. This show was all about young female sophistication. Once again, the clothes were not over-dramatic. They were simple, free-flowing, and elegant. Following the theme of the year, the clothes seemed comfortable and wearable.