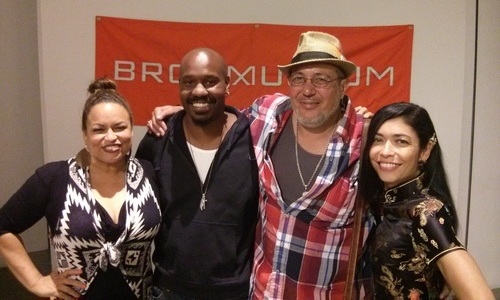 On September 12, 2014, Bronx Stories showcased Artful Health at The Bronx Museum. Bronx Stories is a public program whose goal is to question stereotypes about the Bronx and create a stage for community members to interact more profoundly with the arts.

A diverse group of people attended: young and elderly, Africans, African-Americans, Hispanics from the Caribbean and South America, and Caucasians.

Zavala’s performance demonstrated t how acting can be used to help mentally ill adolescents. Under Zavala’s supervision, the performers taught the audience several breathing exercises that displayed the soothing effects of breathing that vocal artists use. His presentation concluded with a group poem in which every attendee had to say one word they related to his talk.

When Zavala had finished, the audience was ushered into another room where Valentin was waiting to perform. Before she made a move, a spoken word recording accompanied by a musical track broke the silence. Her dance contained elements of yoga and Tae Bo. She and the anonymous poet conveyed their message of birth and life like a choir. Her piece used dance with several meditative practices to teach that art can improve health.

After each featured artists performed, a raffle like open mic with light refreshments was held. De la Luz moved the program along smoothly and ended the night with an open mic session. Each featured artist made it very clear that art is not merely a leisure time practice– it has real life application and that made for an artful night.