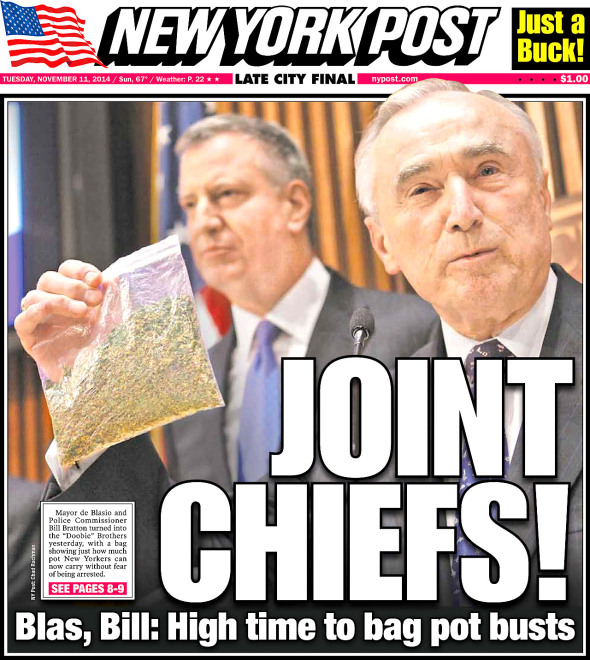 Is the new law a step toward complete legalization of pot?

Only 4 out of 50 states in America have legalized marijuana for recreational use. New York legislators have talked legalization here, especially now that marijuana is permitted for medical use, but nothing yet.

Until now: On Monday November 10th, New York City’s Mayor Bill De Blasio announced that on November 19th, NYPD will stop arresting people on low-level marijuana charges. NYPD chief William Bratton explained that the change in law will instead ticket people caught with 25 grams or less without a criminal violation.

Although the legislation is a step toward recreational use, smoking marijuana is still technically illegal. Those who are caught smoking on the street will be arrested.

Brian Reidy, a studio art major at CCNY thinks it’s for the best. “Police spend too much effort arresting people for low-level marijuana charges,” he says. “The new change will allow them to focus on more dangerous crimes throughout the city and keeping New Yorkers safe.”

College senior Aaron Graff doesn’t seem surprised. “I feel like everyone is just eagerly waiting,” says Graff. “We all know recreational legalization is going to happen sooner or later; it’s just a matter of time. I just hope it’s sooner.”

“I don’t smoke and I never have,” adds CCNY’s Brianna Lampone. “That doesn’t mean I’m against other people doing it. Just like some people like to enjoy a glass of wine after a long day, smoking is many peoples form of relaxation.”

She continued, “As long as people are doing it in the privacy of their own home I don’t see it as an issue.”

The average New Yorker won’t feel like anything has changed; smoking on the street will still land users in jail. “People better know the laws in and out so they don’t get themselves into trouble–especially my fellow CCNY students!” says Sonali Lehki. “We’ve made it this far, lets finish without getting arrested.”