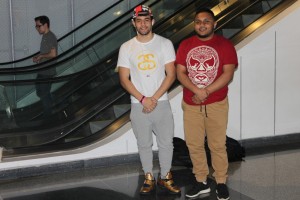 Surveying the average classroom halfway through the college semester, one can notice the apparel of the students. There are students who are dressed in Nike or Adidas gym apparel with gym sneakers who look like they either just came from their morning workout or are about to head to it right after class. There are also the goofy-patterned pajama wearers who are ready to roll right back into bed. And for the vast majority, they are casually dressed, typically fashioning the jeans and t-shirt look. Not to say that they only wear jeans and a t-shirt, but they do put a little more effort than wearing pajamas and a little less than those who treat school like a high-end job that requires a suit and tie.

Why does it matter how students come dressed to school, especially on a college level? Going to school is a responsibility, but doesn’t hold as much weight as going to work. Anna Kolomeytseva, a junior at John Jay College, has work right after her classes end, so she usually wears slacks, blouses, dresses, blazers, and cardigans to school. “If I didn’t have work right afterwards, I wouldn’t come dressed like this,” said Kolomeytseva. “It’s uncomfortable.”

So maybe dressing down isn’t so much as an issue as dressing up. In some cases students on campus have been seen dressing up, but not appropriately. Mini-skirts, short-shorts, low v-neck shirts, and crude language on graphic t-shirts, are only a few types of apparel on the long list of things that are frowned down upon to wear to class. Faculty member, Makeda Jordan, Associate Director of the Center for Student Involvement and Leadership, thinks that some students are dressed nicely, but for the wrong setting. “If you think you can get into a club with your outfit, then it’s probably inappropriate to come to class in,” said Jordan.

Jordan believes that the best way to come to class is comfortable enough to learn, unless an individual is a student leader. “Student leaders are one step up above the average student,” said Jordan. “Nothing crazy, but business casual.”

School is not necessarily a place of business or professionalism. Students don’t have to come to school as if their are going to work at the bank. John Jay Senior and student leader, Benedicta Dorteh, wears comfortable clothing such as jeans, hoodies, and gym clothes. Dorteh is a student leader, maintains a 3.8 G.P.A., and is attending Georgetown Law School this upcoming fall, and her comfortable apparel didn’t hurt her learning experience or professional opportunities.

Though Dorteh contradicts Jordan’s statement about student leaders’ dress code, Dorteh does think there should be some guidelines on the general student bodies’  dress code.

“Use the grandma rule,” she said. “If you wouldn’t want your grandmother to see you in the outfit, then don’t wear it to class!”

John Jay senior Sebastian Ovalle wears a suit and tie every day to school. Dressing to the nine all the time is imperative to him. “A first impression is everything for networking,” he said.

Ovalle is a transfer student from BMCC and believes that his academic and professional experience at John Jay is significantly better due to his apparel. The way Ovalle dresses affects his academic interactions, including with professors.

“Professors treat me as if I’m the smartest person in the room not even knowing if I actually am”, he said. “I feel as though they treat me with a little bit more respect and professionalism.”

Although Ovalle thinks his experiences in a classroom are better due to his apparel, some professors may disagree. English Professor at John Jay, Professor Heiman said that apparel doesn’t matter at all. What really skews a professor’s perception of a student is slouching, snoozing, or using the phone throughout class. “I pick up more on body language than apparel language,” said Heiman.

No one necessarily has to dress up all the time. Heiman’s advice to students is to know your audience. “If you’re going to meet the president of the college, then maybe it’s appropriate to agree to the conventions.”