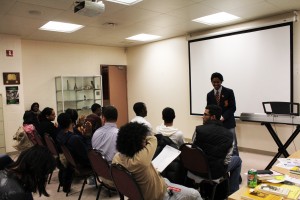 York Students gathered at the African American Resource Center (AARC) on an early Tuesday afternoon for the Pek Open Mic event to spectate, perform, laugh, applaud, and support each other through art.

Much of the performers at the event presented some of their favorite poems like “To One Who Is Too Cheerful” by Charles Baudelaire read by Eric Ortiz 22, an occupational therapy major at York College.

Eric Ortiz reading his poem to the audience, Photo Taken By: Marvin Duarte

“This poem is a lot less filthy and a lot more about the dark, shameful, painful, bizarre, and bitter negativity” said Ortiz “Towards someone who radiates light and love and the desire to somehow “get even” with them because you’re actually humiliated by how much better they are than you, and I think that’s something unhealthy that doesn’t get spoken about very often”

Anneisa Hussain 21. An English major at York College presented her own poem titled “The fall of the natives”. Hussain heard about the event last semester and decided to attend this most recent Pek Open Mic event since it peaked her interest.

The Pek Open Mic was held during club hours from 1-2pm on march 31st in the AARC room 3b04. The event was sponsored by PI ETA Kappa, which is York College’s academic fraternity and hosted by Irshaad Ishmail 20, an English major at York College.

“The idea came from an event I went to at the jamaica performing art center–it was an event where people had a platform to express what they loved about queens through storytelling or poetry or music,” Said Ishmail, “And I thought it would be interesting to implement something similar at York.”

As a host for the past couple of semesters Ishmail never got a chance to perform himself up until this most recent open mic event which, was one of his most rewarding experiences. He got his courage to perform from the rest of the participants to read his own poem aloud.

“When I performed that poem I wrote for my girlfriend who was sitting in the audience, it was the first time I ever performed a poem, but it was rewarding when I saw the smile on her face and the encouragement of the rest of the audience.” Said Ishmail.

Aside from mostly poems being read aloud by fellow students some even took it upon themselves to perform music. Orael Sanchez 21, a Psychology major at York College with a Minor in music played the guitar as she sang along with her best friend Jelitza Delgado.

Sanchez and Delgado did a mash up of “I’m not the only one” by Sam smith, “breakeven” by the script, “excuse my rude” by Jessie J, and an untitled spoken song that Sanchez created. Sanchez stressed that as a team with Delgado they love mixing and mashing things and making it one big cohesive story.

“We like the reaction of “I never would have expected that… especially together…  and the story you told in the process..” And if we can get that reaction while helping someone in the process or showing we were in a similar position, its all the more fun for us” Said Sanchez, “This specific mash we had mixed a while ago because we liked how it sounded and we bent it so the overall story was “two girls cheated by the same person, but they’re better at the end of it… they don’t need someone that vile anyway… and now they have each other and they understand each other and are good friends despite the situation.”

Ever since the spring 2014 Irshaad has gotten at least 2 Open Pek Mic events to happen each semester. Irshaad stressed that the event has gone down to once per semester because of the weeks of preparation that it requires and he hopes that after he graduates the events continue to grow with more participants and audience alike. Most students who attended the event feel that it should occur more frequently.

“I believe it should be hosted more because our school has such a diverse student population of talented students with hidden talents” Said Hussain, “They are able to open up their shells and express themselves in a positive way”