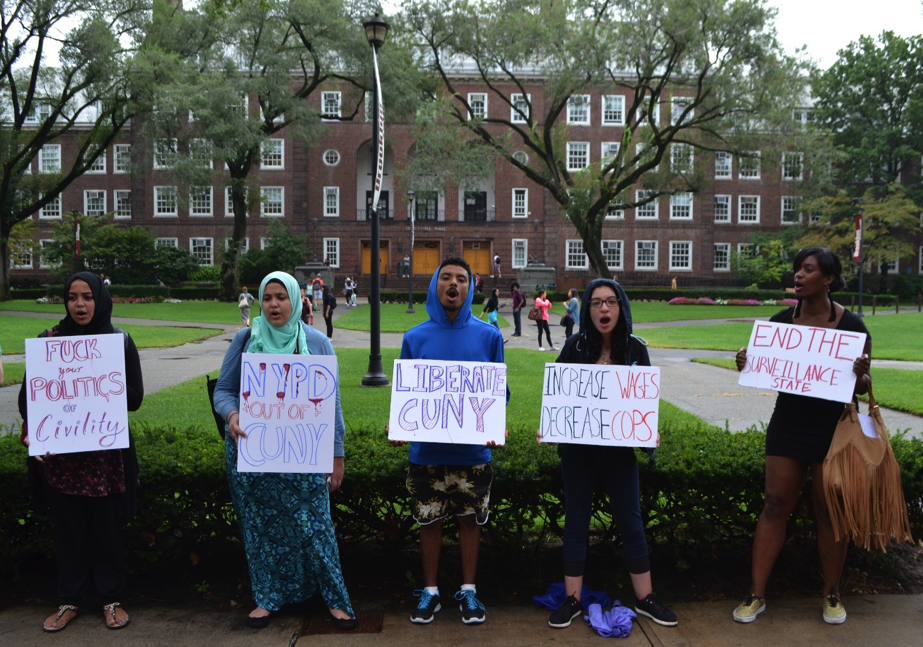 A group of students protested on campus Thursday afternoon over police surveillance at the City University of New York (CUNY) and a recent drug arrest at Brooklyn College.

“Hey, hey, ho, ho, the surveillance state has got to go!” protestors chanted outside Boylan Hall.

Nearly 20 students—mainly a group of friends—protested, most of whom had signs that denounced police spying and their presence at CUNY, such as “NYPD out of CUNY,” and “Increase wages, decrease cops.”

Sophomore Ayah Aly, one of the protestors, said in an email interview with The Excelsior that their goal was to highlight their problems with undercover cops at CUNY, and to pinpoint the faults in the arrest of Javon High, a college maintenance worker apprehended by undercover police officers in July for selling cocaine outside James Hall.

“We cannot dehumanize drug users. Has there ever been a case of a violent drug deal on our campus where students were harmed?” Aly said in the email. “We need to provide resources for drug users to use drugs safely, as well as resources for those who no longer want to use drugs and need the necessary help to stop using.”

Aly said that High’s arrest was unfair because Brooklyn College custodians have difficult, physically demanding jobs while CUNY does not adequately compensate them. In her view, High did not have proper resources because of his low income.

“The difference between the coke dealer and the undercover cops is that the cops are criminals of permission, while the coke dealer is just downright dehumanized for his ‘illegal’ actions,” Aly said in a text.

“It’s more telling of the reasons a faculty member would resort to selling coke,” freshman Sofia Feldmann, who saw the protest, said about High’s arrest and subsequent indictment. “I guess he wasn’t making enough money. They should raise the wages for custodians.”

After they protested outside Boylan Hall for about half an hour, the group went into the cafeteria and continued their criticisms of the NYPD and CUNY. They marched back-and-forth in the aisle while people ate lunch, which some students said miffed them.

“No one wants to hear this while they’re eating,” freshman Victor Hung said.

Samantha Garguilo, a junior, said that the protest should have stayed outside and “not disturbed the rest of the students.”

After they protested outside Boylan hall, the students marched through the cafeteria while students ate. PHOTO/ Faraz T. Toor

The group protested in particular length about police surveillance at CUNY. According to Aly, the students want police presence on campus—specifically undercover cops, like those who arrested High in July—to be reduced or completely removed.

The students who protested also linked police presence at CUNY to concerns that the NYPD spies on students.

“It is a well known fact that the police spy on students,” one protestor said outside Boylan Hall.

“No matter what they do, there’s always going to be undercover cops on campus,” senior Dimitry M. said about the protestors. “But it’s nice that they take a stand in what they believe in.”

Some students, however, said that they at least wanted continued police presence at and around Brooklyn College because of its location.

“I think it’s completely unsafe, considering we’re on Flatbush, to not have the police around,” senior Suzanna Cianci said. “I don’t want to hear people protest against the NYPD, which risks their lives to protest us.”

“Why limit [police presence]? Who are you going to call if something happens?” Garguilo said. “My family’s in the NYPD and risks their lives for idiots like them,” she said in reference to the protesting students.

“It’s not about discrimination,” Cianci said. “It’s about the common good. It’s about safety.”

Aly, however, has a different perspective.

“I’d pull up the 400+ cases of police brutality [that have] occurred in 2015 alone, and ask them if they wanted ensured death or ensured security,” Aly said in response to students who want a strong police presence on campus.