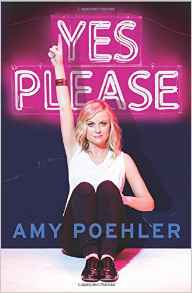 Amy Poehler details her entire life and career from her childhood, to making it in the improvisation world all the way up to having her kids in her book, Yes, Please.

After growing up in Boston, Massachussets and graduating college, she moved to Chicago where she joined Chicago’s Second City and Improv Olympic and fell in love with standup.

She later describes her move to New York to pursue a comedy troupe called the Upright Citizens Brigade. Much of her twenties were spent trying to establish a standing in the comedic world.