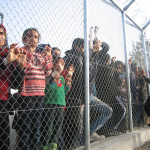 Since 2015, more than a million migrants left their countries to Europe for refuge, according to Eurostat. This caused a humanitarian crisis still developing today.

Batya Septimus, a Queens College alumna, shared stories of refugees in Greece through her website and emails since she arrived March 11 to work as a volunteer.

Septimus and other volunteers from all over the world helped distribute clothing and food to refugees in Chios and Idomeni, places where most refugees live. She also created a website called “Behind the Migrants” that is dedicated to reporting stories of refugees through photos and videos, especially after the agreement signed between the European Union and Turkey on March 18.