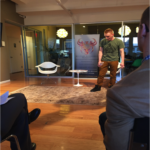 During a forum for student veterans and civilians last month at the Intersections International Office in Manhattan, Patrick Donahue, 33, a former soldier, described the struggles he faced in college.

“I had my ups and downs just like everyone in life. Back in high school, I graduated with a 67 average. I was a class clown and was put in Special Education. My mother had to stay with me in class so I would not act up. I started going to college in 1999 and my GPA was a 1.1. I dropped out numerous times, was introduced to marijuana, and joined the military,” Donahue said.

Donahue stated that he was taking medication for post-traumatic stress in order for him to go to class. While in school, he started a fraternity and received an Associate’s degree last year, graduating with a 4.0 GPA. He is currently pursuing his Bachelor’s degree and plans to go to law school.