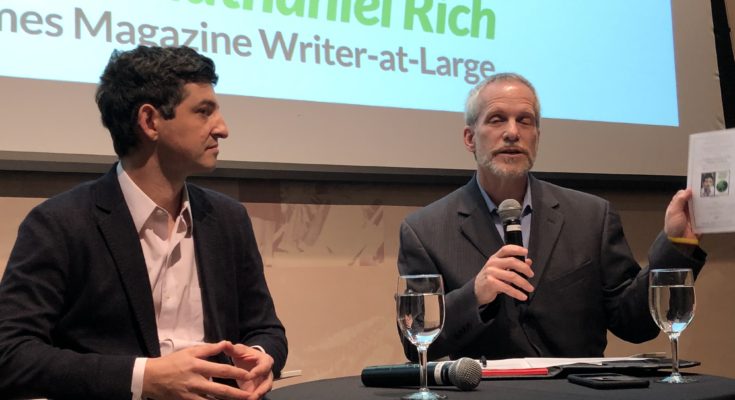 DATELINE:CUNY–While tracing the history of the environmental movement, writer Nathaniel Rich found that experts had a chance to reduce carbon emissions but failed to push it forward. This missed opportunity became a two-part New York Times magazine article and the premise of Rich’s new book, “Losing Earth: A Recent History.”

Rich said finding an original angle from which to approach the topic of climate change was important to him so he decided to focus on the birth of climate activism 30 years ago. Since then, the political hurdles blocking climate legislation have become increasingly more significant. He hopes to encourage people to “come to terms with the failures we’ve had until this point, some of it our own doing, some not” when it comes to climate change solutions.

Moral reckoning was a common theme throughout the night. Rich pointed out that climate activism is gaining saliency as a sort of moral question, propelled by the increased participation of young people. The recent Global Climate Strike exemplifies this. On March 15, students in over 100 countries protested governmental inaction on issues relating to climate change. “You’re stealing the future away from us,” said Rich, referencing the way young people have begun chastising political leaders for their passivity on this topic.

Multiple audience members questioned Rich about climate change being used by politicians as a means of bipartisan fear mongering. In his answer, Rich emphasized the importance of relying on facts. He said that prominent figures in both the Democratic and Republican parties have acknowledged that climate change demands immediate attention, and those who practice denial are choosing to ignore these facts. Towards the end of the conversation, Rich agreed with Alexandria Ocasio Cortez’s formulation of climate change as a social justice issue in the Green New Deal, and he mentioned we will see more people like her, leading the conversation on climate change, in the future.

“I completely agree with him in that we have to re-frame this conversation and turn it into a more moral/people-centered argument, because ultimately what’s going to make people want to take action is understanding the issue in these terms,” said audience member and CUNY Graduate School of Journalism student Janelle Little at a reception following the event.