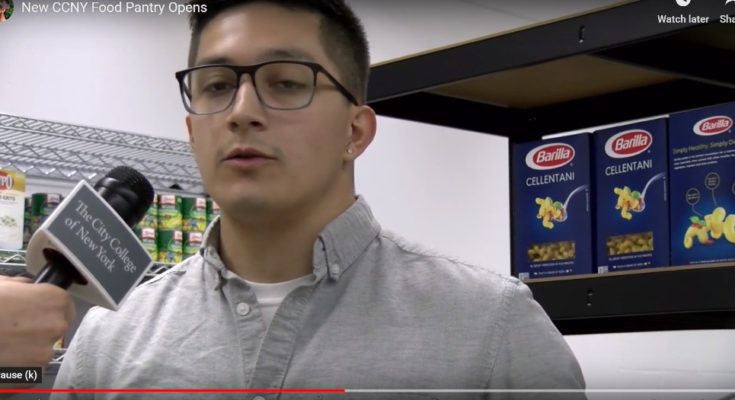 DATELINE: CUNY–Student publications throughout CUNY took a look at food insecurity by highlighting food pantries and other new services introduced on campus.

Hunter addresses food insecurity with new campus programs
HUNTER COLLEGE–If it wasn’t for Hunter College, Kiku Ono wouldn’t eat as many vegetables. Every Thursday either her or her boyfriend head to the third floor of Hunter North to pick up a bag of produce and then cook together at the Brookdale dorm where they live. They split the $14 cost per bag. Ono finds that healthy cooking at home is much easier.

“I would like to have a balanced diet, it’s not always possible,” said Ono, a senior studying music. “I probably eat out more without that Fresh Food Box.”

“For [at least] 15 dollars a week, we get a bunch of produce from upstate distributed to Brooklyn College,” explained Angelica Rodriguez, an Urban Sustainability major and volunteer for Farm Share at BC.

CCNY opens easy-to-find food pantry for students
CITY COLLEGE OF NEW YORK–Food scarcity and food insecurity are issues that affect roughly 40% of the CUNY student body each year. In 2016, the Colin Powell School for Civic and Global Leadership at The City College of New York teamed up with the New York Public Interest Research Group (NYPIRG), a non-profit, non-partisan research and public education organization, to make accessible food on campus a reality.

Baruch helps students grapple with food insecurity through grab bags
BARUCH COLLEGE–Due to the unique makeup of CUNY schools, and Baruch College, particularly, many students are unable to afford basic necessities such as groceries or a MetroCard.

“Some of our students have to choose between taking the train to school or eating that day,” said Brandy Peer, of the Office of the Dean of Students.

The Knights Table Food Pantry: Fighting food insecurity onestudent at a time
QUEENS COLLEGE– On November 19, 2018, Queens College celebrated the opening of its first-ever food pantry: The Knights Table. Located in room LL29 of the Student Union, the pantry has made history this past year in its effort to tackle food insecurity amongst the student population. The pantry was a response to Governor Andrew M. Cuomo’s “No Student Goes Hungry Program” which ensures all CUNY and SUNY students in need have stigma-free access to food. New York is the first state in the U.S to have such an extensive program in place for combating hunger on college campuses, and QC is proud to champion such a noble venture.