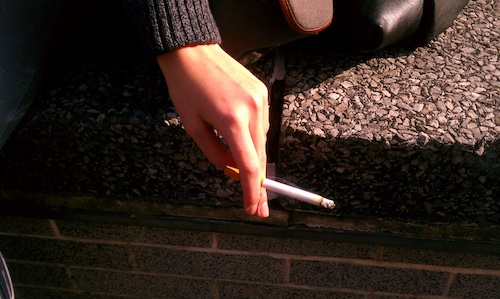 What tobacco ban? by Angelique Williams

At the start of the semester, the CUNY smoking ban went into effect. The new rule prohibits tobacco products in indoor and outdoor facilities.

But if cigarettes are banned, why are so many students still smoking?

Students like Pablo Mujica don’t see the purpose in the ban and continue smoking.  “The smoking ban is a joke,” says Mujica, 23, as he continued smoking.  “The health of others does matter, but putting the ban in place is ridiculous.”

Students are allowed to smoke near campus, and many indulge on Amsterdam Avenue. Cassandra Florentino, a senior, who attends both CCNY and Hunter College, finds that area disgusting. “Having one place to smoke means polluting sideswalks,” she says. On the Upper East Side where Hunter is located “the sidewalks are smaller, making it harder for the people that don’t smoke.”

Romy Fabal, a health-care advocate and registered nurse who works for Student Health Services, is glad the ban was put in place. “It makes me happy to see that something is being done,” she says. “I’m not a smoker and too many people are affected by second hand smoke.”

She helps people quit, and understands that it’s hard.  “I have seen one student come in that is serious about quitting because he smokes heavily,” she says.

She wishes everyone would take the ban seriously. Nurse Romy says, “Because it’s an open campus it will be awhile before the rules are enforced.”