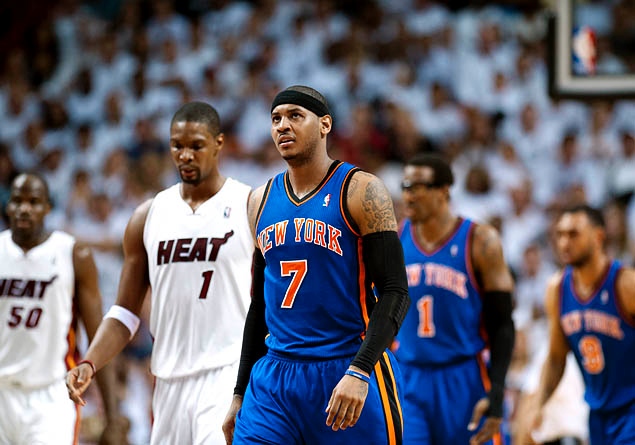 The season opener between the Knicks and Nets was postponed. Now basketball fans are circling November 26th on their calendars as the first Battle of the Boroughs

That’s the line you expect from every general manager when explaining controversial moves they make.

For Knicks GM Glen Grunwald, the explanation may fall short in the Big Apple. After trading away the sensation that was Jeremy Lin, and leveraging the season on Carmelo Anthony and Amare Stoudemire’s ability to gel, Grunwald needs this team to win now. And don’t think he’s not taking notice of the other team setting up shop just across the river in Brooklyn.

Grunwald, like those of us who window shop, thought the price tag for Lin was far too high. So, Lin went to the Rockets and the Knicks signed Raymond Felton and Jason Kidd to help fill the void. Head coach Mike D’Antoni was fired, and interim coach Mike Woodson, the former head coach of the Atlanta Hawks, became the permanent head coach for the Knicks.

Now that that’s all in the rearview mirror for the Knicks and they’re intent on building toward the future. They were set to start that future on November 1st, taking their talents to the Barclay’s Center in Brooklyn, NY.

Instead, there was a natural disaster and the game was postponed. Now, each team is searching for their place in the Eastern Conference. With little room left for error, and a microscope of media, the fans of New York are looking for a historic showdown. Basketball fans all over the tri-state area are circling November 26th on their calendars, the next date that the Knicks and Nets are set to play in Brooklyn’s new arena.

Those that believe the Knicks have had trouble meshing since acquiring superstar Anthony and Stoudemire forget the instability they’ve gone through. On a team where Amare Stoudemire is the longest tenured player with only two seasons under his belt, it’s hard to imagine the team could create any semblance of chemistry at all.

Stoudemire explains he “wouldn’t say [The Knicks] had difficulties. The first year we had a huge trade midseason, then the next year a huge coaching change midseason.” Stoudemire continues, “It’s not that Melo and I are not gelling, it’s just the fact that we are trying to build a Championship-caliber team and it takes a lot of changes to get to that point.”

The pieces that were shuffled in the past two seasons should have had time to settle by now. Now is the time for the Knicks to win. So the pressure is on more than ever to turn it around. Not next season, right now.

A sports writer for thesportscommentator.com, editor for The Campus Magazine, and City College film student, Eitan Negri has the Knicks contending in the playoffs. But he cautions, “It’s gonna take a lot of working through because of the roster changes, definitely playoff contenders. I don’t know past the second round though.”

The hesitation to put the Knicks past the second round comes from their inability to the shed their let-you-down persona. A stench that still lingers over this team from than their less than stellar days of the past 15 years. Haunting images of Steve Francis, Stephon Marbury, and Eddy Curry come to mind.

Frank Miller, from The Daily News and also a City College student, “feels good” about the Knicks as they’ve progressed through the preseason. “I saw [Pablo] Prigioni get five points and eleven assists, so anytime your backup point guard is getting eleven assists, that makes you feel good.

Miller also takes time to warn Knicks fans that they’re not only going to be competing in the Eastern Conference with rivals like the Boston Celtics and Miami Heat, they’ll be contending with the Brooklyn Nets across the river.

“Automatically the [Brooklyn Nets] will have momentum. They have a celebrity owner, a few fresh stars, and everything’s new. I can’t see the Knicks keeping the fan base that they have [in New York City] with the Nets moving to Brooklyn.”

After a tumultuous season last year, the Knicks are looking forward to a clean slate. Then as things were getting stable in NYC – disaster struck. Amare Stoudemire sustained an injury in his left knee that required surgery. Doctors have set the timetable for Stoudemire to come back in 6-8 weeks.

Not exactly the kind of start Carmelo Anthony had in mind, “It’s disappointing. I definitely thought that this was going to be the season that we had a chance to go out there and play together in a full season [with] no injuries, but at the end of the day, you can’t control what happens to your body, you can’t control injuries,” Anthony said. “We just want him to be healthy.”

As somber as the atmosphere must have been after the bad news, center Tyson Chandler attempted to put things into perspective for fans and players, “I know how hard Amare has worked this summer, so I feel for him,” Chandler said. “But like I told him, it’s a little setback in the big picture. In the big scheme of things, it’s a minor setback.”