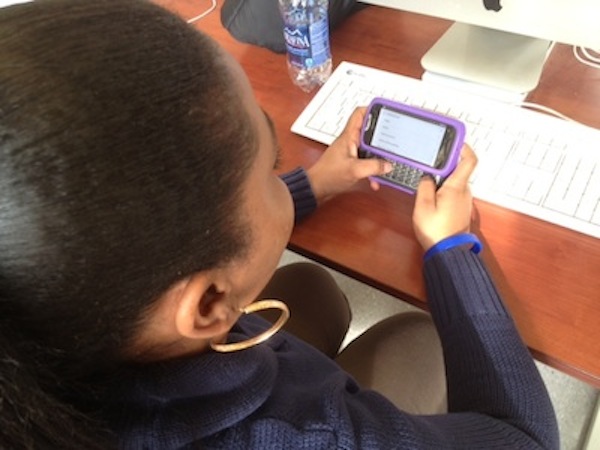 Texting shorthand like this has also found its way into schools, as students have recently started to use it when writing assignments such as essays and college papers. Professors, English teachers and other people who care about language are not happy.

According to an article posted by edtechmagazine.com last fall appropriately titled ‘Is Texting Ruining the English Language, text messaging is now the norm: 97 percent of young adults who own a cell phone text on a daily basis. Young adults send an average of 109.5 text messages a day, notes the article.

The story also cites two studies that looked at whether texting does indeed have a negative effect on the English Language. On a positive note, a “British study of students ages 8–12 discovered a link between text messages and high performance on standardized spelling tests.”  However in an “American study on students from grades  sixth through eighth showed that scores on grammar assessment tests decreased as text-speak use increased.”

Gladys Carro, a professor who teaches advanced grammar at CCNY isn’t surprised. “The more people use ‘whatever- — words, spelling, phrases, punctuation incorrectly — the longer they take to figure out what the correct way is,” she says. “Sometimes, they don’t even recall what the correct word was.”

Student Jordan A. Bertan agrees. “I refuse to use shorthand when I text,” he says. “The only abbreviations I use are lol, lmao, and brb. I don’t want to get use to it.”

“The number 7 should be written out as seven,” he adds.

When asked if texting has affected her grammar, Samantha Dunstan, another student at CCNY stated that “Once upon a time, yes. When I used to shorten words all the time I found myself doing the same in formal papers for school.”

She corrected the habit. “This however has changed and it has caused me to now actually stop and spell out each word,” she says. “I even write out numbers instead of just using them. I do still use abbreviations such as lol, btw, lmao, etc.”

Dunstan thinks everyone should do the same. “I know people that abbreviate everything and speak exactly how they type,” she says, “which is just horrible.”