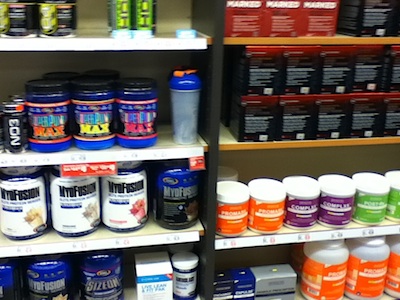 Sports supplements can help you compete better. But are they safe? by Miguel Medina

Over the past year, some of sports’ biggest names, including baseball’s Alex Rodriguez and cyclist Lance Armstrong, have been censored for using performance enhancing drugs. But even non professional athletes use steroids and other performance enhancers.

According to the Office of National Drug Control Policy, in 2007 2.2 percent of 12th graders, or roughly 1 in 45 had admitted to using steroids for at least the duration of one traditional sports cycle, which lasts anywhere from 8 to 12 weeks. But these drugs have serious side effects. Studies have shown that anabolic steroids can damage the heart and liver, stunt bone development, and cause extreme mood changes, weight gain and acne. Steroids are related to testosterone and may cause dangerous depression episodes that may last for months. In addition, early 30 percent of steroid users experience adverse effects, only some of which are reversible when the drug is stopped.

Apart from steroids, many high school, college and recreational athletes order other kinds of supplements online believing they’re going to build strength. But in some cases finding they are having near death experiences with these legal supplements.

Oliver Cruz, a 21 year old City College student, took a supplement called Superdrol. He claimed he had dramatic strength during his first month at Planet Fitness in 2011. “I did research for three or four weeks to make sure that I wasn’t taking anything that wouldn’t harm me,” says Cruz. One month later, Cruz was in the hospital. “I was scratching all over my body.”

His body was shutting down from severe liver failure. “This was on a Sunday and he told me that if I waited until Tuesday I would’ve been dead,” he says.

It turns out that Superdrol contains methasterone, basically a substance that acts like testosterone once it’s in your body and is dangerous. Benjamin Gelfand, a sports clinical specialist for Sports Therapy and Rehabilitation, explains that methasterone acts like anabolic steroids. “In a way it doesn’t sound like a testosterone nor doesn’t it sound like a hormone,” he says. “But it is and it has all those dangerous effects”.

Gelfand suggests that young athletes should take care of themselves more often and be aware of what supplements they take. Some supplements may be safe, but at the end of the day, it’s not worth it. “The most important supplement you need is to be on a diet,” he sums up. “You’ll live longer and is great for your health. Work out and eat responsibly.”