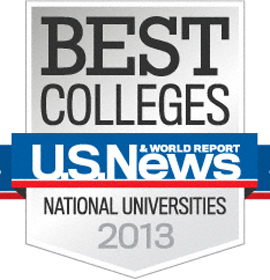 In a banner year for us, CCNY has stepped up in the rankings on another college list–U.S. News’s Best Colleges for 2014.

But we’re not at number 43 alone. Four other campuses tied with CCNY in the Regional category: St. Francis University, Misericordia University, Salve Regina University and fellow CUNY-Queens College. QC also shared the #8 spot with us in the public schools category.

Earlier this year, CCNY made the Princeton Review’s 378 Best Colleges 2014 Edition for a second year running. We also ranked 137th on Forbes’ America’s Top Colleges list. That was up 232 spots from last year’s ranking.

In a press release sharing the news, President Lisa S. Coico lauded the news as showing the college’s progress.

“The significant rise in our U.S. News ranking is evidence of the dedicated work of our outstanding faculty and staff, the continuous success of our amazing students, and the strong support from the communities we serve,” she said.

“In addition, it amplifies the recognition that City College recently received for its academic excellence from The Princeton Review and Forbes.”