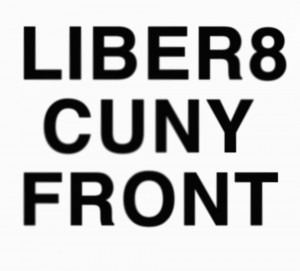 According to the LIBER8 CUNY FRONT website, two student leaders have just been suspended and removed from CCNY’s campus. The Office of Student Affairs reportedly carried out the order.

This news comes amongst last Thursday’s incident where security locked every entrance to the NAC building during student protests to reclain the Guillermo Morales-Assata Shakur Student & Community Center. It also came mere minutes before today’s sit-in outside the Willie Administration building.

It is not known which groups the arrested students are affiliated with at the moment. More as we get it.

UPDATE: Runnin’ Scared, a Village Voice blog, reports the two students suspended were Khalil Vasquez and Tafadar Sourov. According to the story, the two students-members of the Revolutionary Student Coordinating Committee-were approached by CUNY officers after class today. They then took their student ID’s and broke the news to them.

The two are banned from campus for the duration of their suspension. In related news, CCNY’s Faccebook page removed articles it previously posted from the New York Post, Daily News and amNew York this morning , supporting the Center’s closure.

“Recent articles on student demonstrations that were posted on this page in no way reflect the views of City College, and have been removed,” a message on the page read.