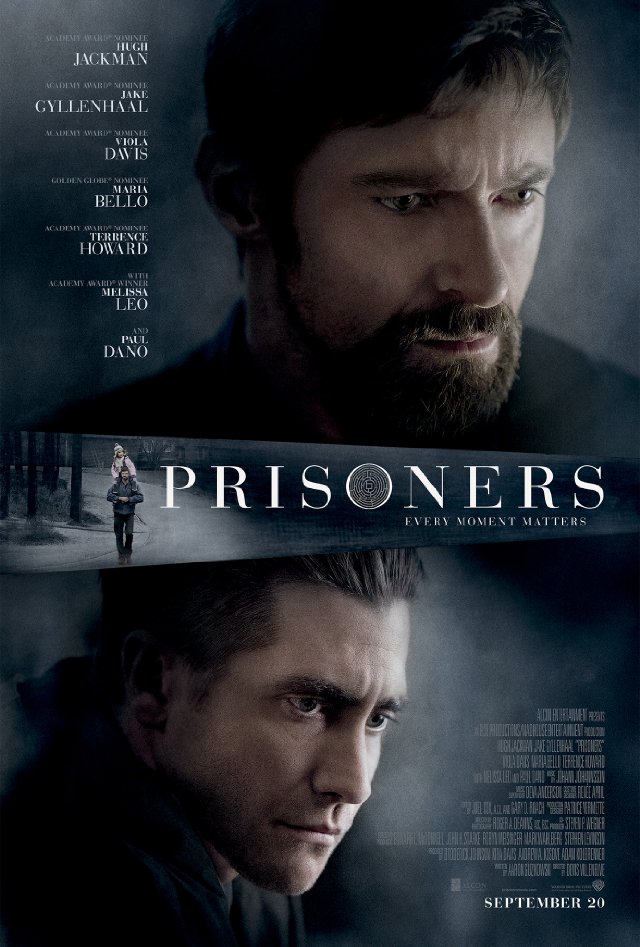 Denis Villeneuve’s Prisoners is way better than it looks in the trailer. The trailer seems to give away all the secrets of the film upfront; it portrays the film as lacking depth, but in reality, it’s just the trailer that misleads. There is much more to Prisoners than one may anticipate.

The film star’s Hugh Jackman (surprise, surprise) as Keller Dover. Jackman is having an over-exposure problem at this moment in his career. As the actor seems to appear in every other film released these days, this creates questions that shouldn’t exist like, “What is the Wolverine doing in this movie?” Nonetheless Jackman delivers a solid, if not multi-dimensional performance. His energy keeps the movie constantly driving forward.

The film opens with two working class families getting together to celebrate Thanksgiving. Festivities abound, but while the responsible adults of the film have their attentions focused elsewhere, their two little girls run outside to play, unchaperoned. By the time the girls’ absence is noticed, it’s too late. The girls are gone. They have been taken. The major conflict of the film then is how to get the girls back alive.

This job falls on Detective Loki, (Jake Gyllenhaal) but when Loki fails to produce results quickly enough, Keller Dover decides to take the search for the girls, and for civil justice, into his own hands. Performance-wise, Gyllenhaal as Loki is the highlight of the film. He maintains a subtle, calm composure, which contrasts Keller’s (Jackman’s) constant flying-off-the-rails. Loki shows a certain vulnerability while still being able to pull off fast-pace action sequences in an authentic, belivable way. He is very enjoyable to watch.

The actual visual experience of Villeneuve’s films is very important. His 2010 film Incendies made full use of wide and vast cinematography applied in exotic landscapes. This visual imagery captivated, but all the technique was there to serve the story, the plot developments, the characters. Incendies is a masterfully crafted tragedy and Villeneuve’s commanding technique is evident too throughout Prisoners.

Like Incendies, the filters and tones that are applied to the film, as in the actual visual images on screen, are gloomy and sepia-toned. There’s not a single sunny sky, a warm day, an orderly room. Sets are designed to feel dark and empty, the best scenes use sets that play with space, showing both the abundance of vacant space for some characters, while still emphasizing the feeling of enclosure felt by others. The use of light and dark, order and disorder, space, all things that cradle the actors performances, are created by Villeneuve, expertly.

The suspense of the film continues all the way to the very end as Keller Dover’s untamed compulsion to find the missing girls leads to a perfectly executed, nail biter of an ending.