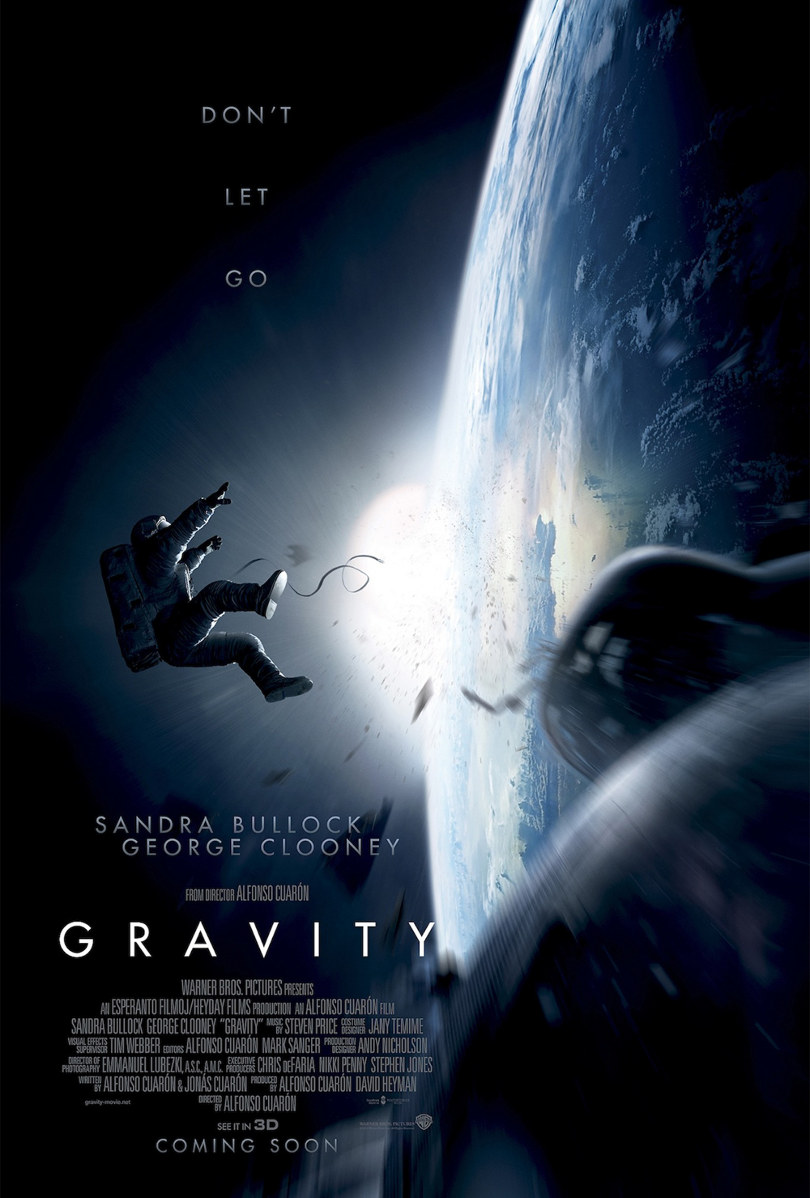 Gravity attempts to portray what astronauts would actually encounter on space missions, such as how space walks would actually unfold,  and the hostility of the environment of space towards anything resembling Earthling life.

The ninety or so minutes of Gravity are the linear unfolding of a series of destructive events in the lives of Astronauts Ryan (Sandra Bullock) and Kowalski (George Clooney). Director’s Alfonso Cuarón’s hones in on these destructive events, treating them as a single, passing moment in time, or a moment of crisis.

The film opens with a group of astronauts undertaking what seem to be standard, routine repairs to the outside of their ship. The tone is jovial, if not a little tense as Clooney zips around the ship’s vicinity with a jet pack jokingly. He wants to break the current space walk record of seventy-five minutes. But Mission Control suddenly issues a warning. A massive field of space debris is headed straight for them.

From here on, only chaos reigns as Cuarón begins to eliminate all probable positive outcomes, one by one. After the astronaut’s ship is destroyed beyond repair Ryan and Kowalski attempt to propel themselves a floatable distance to a space station. As they push forward through space’s vacuum, towards their beacon of hope, space’s vastness and hostility are emphasized, along with their minisculity; “I hate space,” says Ryan somewhat lightheartedly. This comes after she has just been precariously saved from a perpetual spinning away into deep space, a particularly claustrophobic moment of the film.

Gravity has all the individual parts of a film rated high, near a 10, but once the parts are assembled, the whole is not equal to the parts. Even though the film is shot in space, and is set to depict a realistic portrayal of how events like these could take place, the film is really just about Ryan, a single human’s struggle to survive, and then with this revelation the epic space setting becomes incidental.

Problem: Ryan is not an interesting character. She seems ill prepared for such a dangerous space mission, and when she talks about her daughter, in a moment that seems to be used to attempt to ground the film in reality by showing us the why, we don’t care about her daughter. The current situation at hand is much more interesting. Including this talk about life back home was a mistake that took me out of the moment. I don’t care about Earth here; I care about this amazing crisis taking place just above Earth. A space movie should emphasize themes bigger than the individual. The mission should be more important than the life of the astronaut. Simply making it back to Earth alive is not an exciting enough conclusion.

Although maybe the best of her career, Bullock still delivers a subpar portrayal of a character that is herself subpar. I loved Cuarón’s Children of Men and I feel here Cuarón’s work is great. From a technical perspective, Cuarón’s filmmaking is incredible, the cinematography stunning, the portrayal of space amazing, so what went wrong? Besides a storyline that fails to transcend human matters, a factor that Cuarón may have been able to gloss over under different circumstances: when a film centers on a single actor, and that actor is Sandra Bullock, the greater potential meaning is diluted by the execution’s shortcoming.