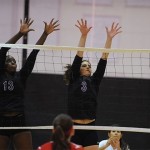 The loss drops CCNY to 4-4 in conference play, 10-18 overall, while Brooklyn, who improved to 4-3 in CUNYAC play, is likely to have home-court advantage in the first-round of the upcoming CUNYAC Championship playoffs set to begin next week.

After both teams traded wins back and forth throughout the first three sets, CCNY rallied back to win the fourth set 21-25.  CCNY took a commanding 7-2 lead, then expanded it to 9-4 before Brooklyn scored and unanswered nine points to take a 9-13 lead before Jillian Escobar’s service error broke the dry spell for CCNY.

Victoria Del Toro led CCNY to three straight points, tying the set at 13 with an ace.  The second half of the fourth set saw seven ties and five lead changes before CCNY took control late, scoring the final five points to win 25-21.

The fifth and final set saw CCNY score the opening point, then Brooklyn taking a 4-1 lead before the Lady Beavers rallied back to tie the set at seven.  An error by Brooklyn’s Francesca LoCascio gave CCNY the slim 8-7 lead when the teams switched sides.

CCNY went up 10-7 and looked to take control until Leticia Marotti’s service error sparked a three-point rally for Brooklyn, tying the set at 10.  Both teams would rally back to 13-all, however a service ace by Brooklyn’ Crystal Wu and an attack error by CCNY’s Chantl-Saye Joseph would ultimately doom CCNY to the game deciding 13-15 loss.

CCNY will look to match their 11-win total from last year on Wednesday night when they travel to Kings Point to take on the Merchant Marine Academy.