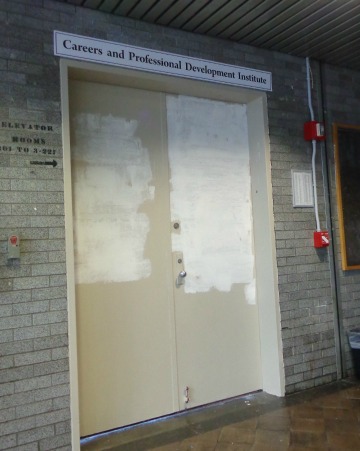 This is what remains of the Guillermo Morales/Assata Shakur Community & Student Center after CCNY’s actions over the weekend. For those unaware, the college locked down the NAC and the center early Sunday morning, preventing any more students from entering the Morris Raphael Cohen library.

At 12 am, NYPD officers told students studying inside the library they could not reenter the building if they left. This, despite the school sending out an email six hours later, notifying students the library was open 24/7 for midterms.

While the NAC and library reopened Sunday afternoon, the Morales/Shakur center remained closed. Anyone coming to room 3/201 today, expecting to discuss imperialism or help distribute fresh foods instead found the paint and power fist scrubbed away and a “Careers and Professional Development Institute” sign posted directly above (this would be the second such space on campus).

Per a press release yesterday afternoon by Deidra Hill, CCNY’s Vice President for Communications And Marketing, security removed the room’s contents for “safekeeping and documentation so they can be redistributed accordingly.”

The fact that the CCNY administration did this without notifying Undergraduate Student Government or other student groups who use the space speaks volumes for what students may face in coming years.

This morning brought a potential harbinger of that future. Students arrived to find an increased security presence on campus. From the Admissions building to the NAC, more officers than usual graced CCNY’s buildings. And as student activists gathered at the NAC plaza for an emergency protest, high-ranking members of the school’s security team watched over them.

Despite their appearance, students, faculty and workers stood up and blasted the school’s decision via open mic, as captured in video The Campus recorded at the event (which you can see here).

Halfway through the speakout, a fire drill brought out more students. It is not known if it was legitimate, or someone pulled the alarm to bring a larger audience outside.

Shortly after the open mic session ended, the crowd headed around the NAC to attempt reentry into the center (as seen here). As expected, security was ready and locked the Amsterdam Avenue entrance, promoting students to bang the door with their fists. Undeterred, they then entered the Writing Center and snaked into Cohen, continuing to chant and make noise before holding another open mic session in the NAC rotunda.

Another student protest took place at 6 pm, planning for future actions to retake the center. If today was any indication, those plans will need to be more intense than previous efforts to win the space back.