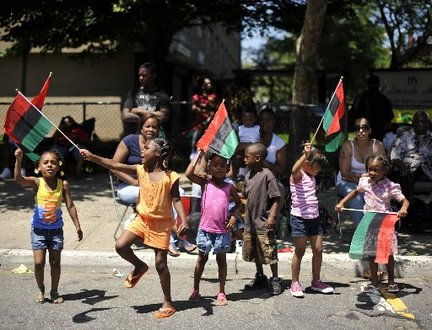 Every year for as far back as I can remember in September I attended the African-American Day Parade. The energy and excitement of back to school time mixed with the rush of warm weather and summer memories flowed into the festivities. Not only African Americans, but joyous faces of all colors packed the route from 110th street and what was then called 7th avenue, to 145th and 7th avenue. I was always excited to get a whistle and participate in my own little way as a child spectator. The fun was genuine and I didn’t have to travel too far as my grandfather lived along the parade route. The cheers of people reaffirming their cultural identity was a beautiful sight especially when I would go up stairs to my grandfather’s apartment to get a greater view of the parade.

But a decade ago, when I was 11 years old, I first noticed the shift from a fun-loving event to something more sinister lurking underneath the marching bands and cheers.

I had recently returned from sleep away camp, and I was wearing a blue bead friendship necklace that a fellow camper had given me. The innocence of the necklace was corrupted when a couple of teenagers approached me on a closed off street and demanded to know the origins of my necklace.

The author, a CCNY student

“Ayo, you Crip?” asked a curious teenager. “No!” I replied, my heart beating fast, scared to now have to confront the familiar yet foreign world of gangs and criminality.

“Oh ‘cause that blue bead means you a Crip,” the second teenager said in a serious enough tone for me to understand that I had just inadvertently pledged allegiance to the Crips by wearing the necklace with a solitary blue bead. The teenagers performed the Crip handshake and laughed. In retrospect I think they knew I was not part of their gang, or any gang for that matter but in their own adolescent way, were trying to warn me of the dangers that something as trivial as a single blue bead on a black cord could get me hurt or worse, killed.

Fast forward a few years and my enthusiasm for the parade diminished even more. By then I was a student at Frederick Douglass High School in Harlem. When talks of the parade would come up some of my friends would tell me they were going to the event “strapped.” I got the sense that they were not planning to carry concealed guns to start trouble, but as a safety precaution.

A year later in 2004, I was saddened, but not shocked to hear that a young man about my age had been shot dead on the corner of 119th street and Frederick Douglass Boulevard over an argument.

When people bring weapons to what is supposed to be a celebration Black culture for fear of being harmed—that’s when I realize my life is worth more than to bleed out and die on a street corner. This is why I skip the African American Day Parade.