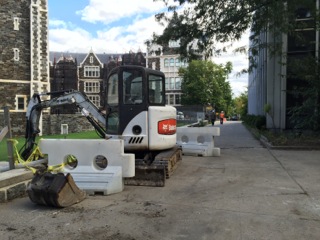 When will our campus ever be complete?

The new semester is here, and while classes are rolling in, construction is not rolling out. “It’s annoying and makes the beautiful campus look ugly,” says Kimberly Davis, a CCNY junior about the noise, workers and yellow tape–all signs of continuing construction. “It’s been two years and I see no change.”

Davis is not the only student on campus who is annoyed. The loud and distracting sounds of construction outside of Shepard Hall can become so extreme that it’s been a problem to focus in classes. Students and professors have expressed how the work needs to be done and over with.

“I literally watched my public relations professor stop speaking because of the beeping of construction trucks,” says Christian Smith. “This class was at 5pm and they were still making noise!”

Most students expected most of the work to be completed over the summer. Stacey Gray, a lawyer President Lisa brought in to deal with faculty relations, insists that alot of work did get done during the summer months and points to 89 building renovations made to the campus over a 6-week summer period. She says that there has been a lot of effort in making the campus better.

“And there is more to come,” she said at a recent faculty gathering. But for most of  us, it feels like a waiting game.