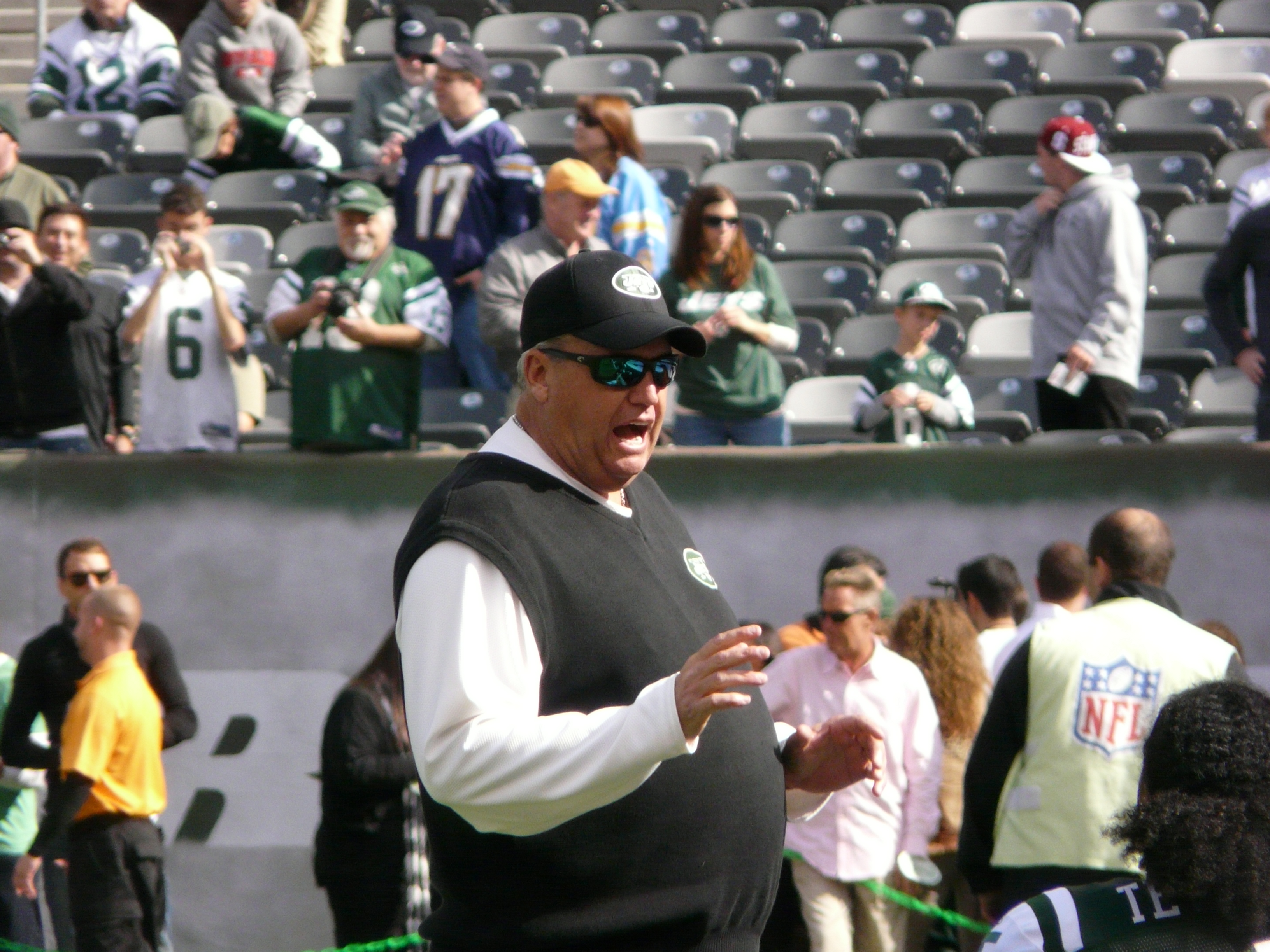 Rex Ryan may not be the only problem with the Jets; General Manager John Idzik has made a number of odd free-agent decisions in the off season. PHOTO/ Wikipedia Creative Commons

Despite the bold proclamations of “Super Bowl or Bust” from New York Jets’ Head Coach Rex Ryan, it seems that the Jets’ bubble may have finally burst. After a shocking no-show in a 31-0 loss to the San Diego Chargers, any thoughts that the Jets will build from last year’s 8-8 season are just about officially gone.

The Jets’ offense is in shambles with no playmakers and couldn’t even cross midfield until halfway through the fourth quarter against San Diego. Their defense is also sputtering, as the National Football League’s elite quarterbacks have picked apart the Jets’ patchwork secondary.

But despite their problems on the gridiron, the Jets’ issues have really stemmed from the recent incompetence from the top. Ryan and General Manager John Idzik deserve blame for allowing this franchise to come part at the seams.

According to NJ.com, Jets inside linebacker Demario Davis called out his teammates and himself following the loss in San Diego and claimed that were “not practicing like a championship football team.” Jets center Nick Mangold echoed his sentiments. He felt that the Jets “have had some errors in practice that we’re trying to get cleaned up, and we need it clean it up during the week, and into game day.”

As a head coach, Ryan’s job is to motivate his team to play hard, prepare for their game, and try to win. But ESPN reported that “a few” Jets, including quarterback Geno Smith, missed team meetings the Saturday prior to the Chargers’ game due to a mix-up over the difference between East and West Coast times. While it’s clear that their actions were a mistake, it is simply inexcusable on Ryan’s part to allow them to play despite not being 100 percent prepared for the game.

One doesn’t establish a winning culture by condoning players’ missing team meetings, not actively preparing for games, and lacking discipline, which the Jets have done with increasing regularity this season. They already committed more than 40 penalties through five games.

However, while Ryan has made his mistakes, Idzik is no less guilty for his part in hurting the Jets. As per the New York Daily News, Idzik’s scouting has been head-scratching, as he’s repeatedly given older players with diminishing skill sets or off the field issues contracts, many of whom have never made the team.

Idzik’s frugal free-agent moves include signing Mike Goodson, who was promptly suspended for drug use and then cut for missing mandatory minicamp, and signing journeyman cornerback Dmitri Patterson, who went AWOL prior for 48 hours during the preseason and got torched in practices before the Jets released him in August.

In addition, Idzik’s draft resume has been abysmal. Out of 12 picks in last year’s NFL Draft, only five are still on the roster. Despite what was arguably the deepest wide receiver draft in years, Idzik struck out on all three receivers he drafted, because his failures have also forced Ryan to alter his defensive game plans, playing more cover-two rather than man-to-man coverage, which makes players play out of position and struggle to adapt to new roles. Jets owner Woody Johnson has many decisions to make regarding the future of his head coach and General Manager. PHOTO/ Wikipedia Creative Commons

Although Idzik quickly turned the Jets $19.4 million-deficit into a $5.7 million-surplus when they cut veterans like Bart Scott, Eric Smith, and others. Idzik been stunningly frugal and has refused to address the Jets’ main needs at WR and CB. The Jets have the second-most cap space in the league at $24.3 million, and yet Idzik’s stubbornness and unwillingness to spend have crippled the team. He cut veteran cornerback Antonio Cromartie and then refused to offer him a lesser deal, even though Cromartie wanted to stay. Now he plays like a star for the Arizona Cardinals.

Idzik refused to speak with free agent and former Jets star Darrelle Revis, who then signed with the New England Patriots, and then low-balled Dominque Rodgers-Cromartie before “attempting to game a fair deal” after the New York Giants offered him a deal—to which he agreed, according to the New York Daily News.

Emmanuel Sanders, who is close to the top of the league in catches, wanted to visit the Jets when he was a free agent in the offseason, but Idzik felt attending Texas Tech’s Pro Day was far more important. Idzik’s practices of showing interest in free agents but then waiting to see whether other teams would move on so that he could offer low-end deals was so bad that one high-ranking Jets official apologized to at least one agent for the questionable practice, according to the New York Daily News.

While it’s clear that Idzik has done a terrible job at getting the players to help Ryan succeed and has undermined Ryan’s chances to succeed, this recent mess has been a something of a joint effort. The team is not even close to competing right now, and it is clear that changes must happen. What Jets owner Woody Johnson must decide is whether both men will be around to see them all.