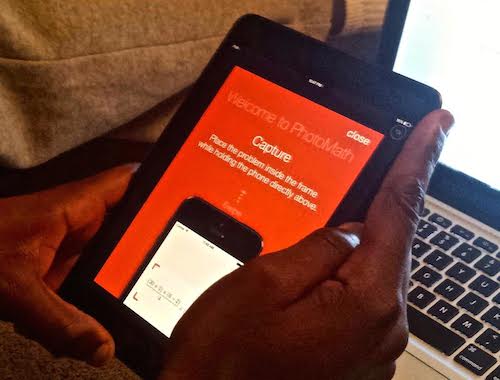 Math has always been an intellectually challenging subject for many students. Just ask Kareem Joseph, a graduate student at CCNY. “I hate math,” says Joseph, 26, who has struggled with math his whole college career. “Graphing calculators are huge and even using them I still sucked.”

Students like Joseph who find math problematic can rejoice thanks to Photomath, the smartphone app that solves equations in seconds. The app, which is powered by Microblink real-time text recognition software, works by photographing the problem. Then, it will not only solve the equation, but also provide step-by-step instructions on how to solve it for yourself. This app could some day replace calculators as the preferred method for students to solve math problems. Currently, the Photomath app supports arithmetic expressions, fractions and decimals, powers and roots, and simple linear equations with new features being added periodically.

With the nation’s demand increased for math literacy, first calculators and now this app can make mathematics simple. But many worry that it could also become a crutch for some students.

Math professors question the app’s value. “The idea is not new,” says City College math professor Maxwell Musser. “It gets to a deeper issue, do you value solving problems on your own? Does it matter?”

Musser’s colleague Anthony Delgado wonders, “Do you think students will try to cheat more?” With technology so readily available it does beg the question.

Delgado isn’t totally against the idea, but thinks the Photomath app is not quite there in terms of handling college level math equations. “I think it would be better for a more middle school, elementary school student,” says Delgado.

Musser agrees. “The bottom line is it’s not that interesting now,” says CCNY Math Professor Musser. “But it could be.”