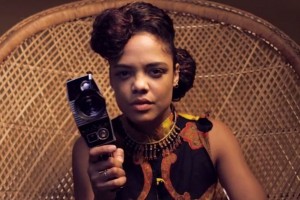 Justin Simien’s new indie-film, “Dear White People,” which opened in select theatres Oct. 17, touches on elements of hyper-focused racism against the black community by white culture in a prestigious educational setting. However, where the movie might confront the prejudices we may see on reality television or right-wing media, it failed to address elements and parts of black culture that could have truly stemmed the tide for a conversation of race and media.

Simien’s film focuses around a group of black students that embody the culture of modern black youths such as the nerd who’s only “technically black,” the angry black woman embodying a Black Panther’s member and an assimilated black woman who shuns her hood background.

Tessa Thompson plays the half-white-half-black film student, Samantha White, who wants to rail against white oppression and mini-racisms of the college with her radio show “Dear White People,” which hilariously announces platitudes about white culture. Some are quirky, such as, “dear white people who use Instagram, you have an iPhone, and you go on hikes. I get it,” and others that border on heavy-handed but are known to be true, like, “dear white people, dating a black person to piss off your parents is still racism.”

Whereas the movie rings a bit like a “Shit White People Say” YouTube video at points, the movie addresses ingrained issues that many black students on a white campus might understand. Though, for multicultural students at York, the cultural issues addressed in the film felt more outside of the school than within the campus’ gates.

“White people get nervous around me,” said Damien Lee, an undeclared student. “I went to private school, though, so I’m used to that.”

But one of the most nuanced issues the film addresses is the use of a gay black character, Lionel Higgins. In Simien’s interviews, who also identifies as gay, he mentions that it’s “finally time” to have a positive gay black male depicted in films, who isn’t the typical cliché.

However, in mainstream media, gay characters have been portrayed positively, though they’ve been primarily white.

“I will say it’s becoming less homophobic. But out of all the cultures, we are still the most homophobic,” she said.

During one of the screenings of “Dear White People” in Union Square, primarily black audiences gasped and hissed at Higgins’ character lip-locking with another male. Even in a scene earlier, a team of characters surrounded Higgins at lunch to assure him that they’re “not the homophobic blacks.”

“I do feel a hesitancy within popular black culture to embrace images of homosexuality,” Simien told popular blog LAist. “Part of that is because black culture is a marginal culture, it’s hard to define, and the images of black people are very limited so the images of everything within it are limited. There are stigmas and religious beliefs and all sorts of things that are a part of black culture that are not terribly encouraging of being black and gay. It’s an issue that we do face.”

But there are those who disagree with labeling black culture as predatory against the LGBT community.

“Black culture is part of American and World Culture, and that culture is presently homophobic,” said Professor Mychel Namphy of the English Department. He was clear to discern that blacks aren’t any more homophobic than whites. “In that case, black culture participates. But you won’t find me railing against black culture as singularly being homophobic.”

Still, “Dear White People” holds a mirror to the face of not just black audiences, but also white audiences that may have made assumptions on black culture.

The climax is sure to leave a number of audiences, both white and black, pale-faced with a fraternity putting on a blackface party, but the best part of the film is that everyone learns a bit more about what it means to not necessarily “be more black,” but instead be a bit more themselves.