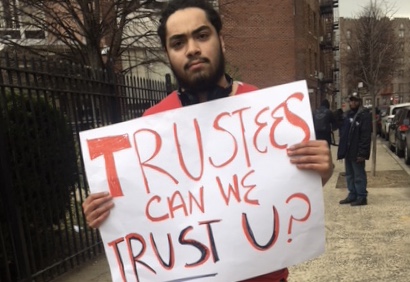 CITY COLLEGE OF NEW YORK/BROOKLYN COLLEGE–Student journalists took note of the high tensions at Monday’s CUNY Board of Trustee meeting.

Outrage at the CUNY Board of Trustees Public Hearing

CITY COLLEGE OF NEW YORK–Tensions were high at the CUNY Board of Trustees public hearing on the evening of March 12. Several CUNY students protested while they waited in line outside on the windy, near-freezing day to enter the meeting held at Brooklyn College. Their chants echoed down the streets, through campus, and were heard from inside – “Whose fees? Our Fees!”, “CUNY first? Or Cuomo first?”, “Hey Cuomo, what do you say? How many students did you starve today?”. Sabrina Yeung, a College of Staten Island student, said while standing in line, “this is a fight for student rights.”

BROOKLYN COLLEGE (The Excelsior)–City University of New York (CUNY) students and faculty members were given the opportunity to voice their concerns towards the CUNY Board of Trustees (BoT) at a public hearing on Monday evening, in the Gold Room of the Brooklyn College Student Center.

BROOKLYN COLLEGE (The Kingsman)–SUBO was the epicenter of frustrated and angry students, faculty, and food staff employees Monday as a CUNY-led board held a town hall that became the flashpoint of fiery outrage, telling trustees, “can we trust you?”

The Voices Behind the Student Activity Fee Protests

BROOKLYN COLLEGE (The Excelsior)–Anyone walking outside campus last Monday evening would have likely heard the protests outside the Student Center during the City University of New York (CUNY) Board of Trustees meeting.